A green corner on balance sheets 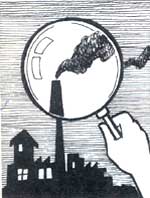 BIG BROTHER government has decided to work towards removing two more 'hurdles' for industrialists in the country -- the state pollution control boards (SPCBs) and the ministry of environment and forests (MEF). Indian and foreign industrialists have long bemoaned the inspector raj of the SPCBs. Partly to get around this and partly to make their pollution data transparent, the MEF has decided to make environment audits compulsory for all industries from this financial year.

The MEF intends to make available to the public all the pollution-related data submitted by industries to SPCBs under the notification. It will make it mandatory for companies to put the data on their balance sheets, says Mukul Sanwal of the MEF. "While we have not made it binding to include the audit's results in annual reports as yet, we are moving in that direction. The buzzword now is voluntary disclosure." The move will make the directors of a company responsible for misinformation, accidents and exceeding pollution standards.

Public accountability can, therefore, be expected to be the future basis for controlling pollution from industries. With this transparency, SPCBs can start analysing the pollution data to identify appropriate pollution control policies, says K P Nyati of the National Productivity Council. The audit data can be considerably more useful to the public, law enforcers and the industries if it is analysed and published as sectoral analyses.

The moot point is how seriously industries will take this exercise. On one hand, in the absence of financial incentives -- higher depreciation, tax write-offs and soft loans -- for environment auditors and equipment, many firms may not think an audit worth their while, fears A K Roy of the World Wide Fund for Nature. On the other hand, there is the ponderous legal system. If a firm willfully submits wrong information, legal action would take years to achieve results. Witness the dismal record of the various SPCBs who, till mid-1991, had filed 4,500 cases, only a quarter of which had been decided.

While the government has said that it wants the industries to submit audits, it has failed to clarify who will carry these out. Engineers India Limited (EIL) sources feel that industries will have to use in-house expertise wherever available as there are but a handful of firms competent to carry out such audits in the country. The EIL has some expertise in the area of petroleum and natural gas, Desein Consultancy Services in power and Dalal and Mecon in steel.

This monitoring and hiring of experts will not be cheap. Industry is fighting shy of shouldering the burden in a recession year. The government has also refused to pick up the tab. Says Sanwal, "If we give industry a subsidy or other fiscal incentives to comply with the audit, it will lead to a chicken-and-egg situation -- should the money come first or the audit?"

Rajat Nandi of the Confederation of Indian Industry (CII) sees a silver lining for consumers but only in the long term. Once industries realise that wasting less is good for the bottom line, their costs of production are likely to decrease. Therefore, after an immediate increase in prices, there will be a decline in the medium term. It remains to be seen if customers can absorb the immediate cost increases at a time of ballooning prices.

It is too early to say which way the wind will blow. Industry has been mouthing platitudes about the need for a greener country. The government realises that six years of a stringent act, the Environment Protection Act of 1986, have achieved little. If profit is the motive, complying with the audit makes sense as this will make industries more efficient and so, clean up their act.