A little alcohol a day can keep heart attacks at bay

But drinking beyond a stipulated limit can increase the risk manifold 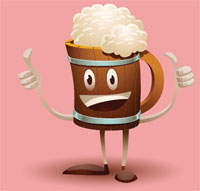 People with type 2 diabetes who drink wine in moderation can dramatically reduce risk of heart attacks and death, researchers have found in a study that was carried out in 20 countries, including India. Heavy drinking, however, cancelled out any benefit.

The study, published in February 2014 issue of journal Diabetes Care, showed that an individual's risk of getting a heart disease lowered by 17 per cent, and the risk of dying because of them reduced by 13 per cent if wine is consumed in moderation.

Graham Hillis, an author of the study and associate professor at George Institute for Global Health, Australia, said the study provides evidence that people with type 2 diabetes who drink wine in moderation have a lower risk of heart attack compared to those who do not drink alcohol at all. However, he warned that potential benefits of drinking wine on health of heart should be weighed against the potential detrimental effects of alcohol, such as increased risk of hypoglycemia, liver-related complications and increased incidence of certain cancers. 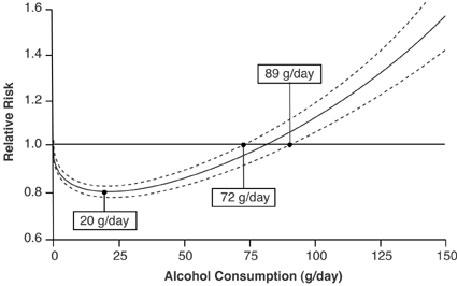 Since the 1970s, studies have been conducted to quantify the association between consumption of alcohol and heart diseases. In 2000, a meta-analysis of 28 such studies was conducted. It concluded that 20 g of alcohol a day (one or two standard drinks) was associated with a 20 per cent reduction in the relative risk of cardio-related problems. Drinking a limited amount can reduce risk of heart attacks by as much as 20 per cent. But drinking beyond a stipulated limit can increase the risk manifold.

The protective effect was found to persist up to a consumption of as much as 72 g/day and only became significantly harmful after 89 g/day (approximately 7 standard drinks a day). The amount of alcohol good, bad and optimal for human consumption is represented through a well-accepted J curve (see graph). The J curve effect means when alcohol is taken in moderate amounts, the risk of heart disease comes down as the curve at the bottom of the J but if it is taken in excess the risk increases as on the right side of the J. According to the J curve, alcohol consumption should not be more than two standard drinks per day for men and one standard drink per day for women.