Agrin, a protein released by nerve cells, helps in triggering off the formation of a machinery through which neurons communicate. 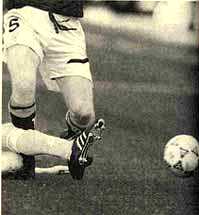 IN A MAJOR breakthrough, neurobiologists at the Stanford University in USA, led by Jack McMahan, confirmed the protein agrin plays a vital role in communications within the nervous system.

Though neurobiologists have focussed their attention on the communication mechanism of nerve cells over the past several years, they were unable to detail how nerve cells and their targets establish these synapses. Now that scientists understand the working of agrin at the neuromuscular junction -- a synapse relatively easy to study because each individual muscle cell is innervated by a single nerve terminal -- neurobiology has taken a big leap forward.

In the 1930s, scientists working on the neuromuscular junction discovered that when an impulse travels down a motor nerve, a neurotransmitter called acetylcholine is released at the nerve cell terminal -- the part which makes contact with the target cell membrane at the synapse.

Acetylcholine facilitates the transmission of an impulse across the synaptic gap. It diffuses from the nerve terminal to the muscle cell membrane, where it triggers an impulse that results in muscle contraction.

Though this sounds simple enough, some delicate molecular choreography is required to facilitate this. As McMahan points out, "In order for synaptic transmission to occur, a lot of machinery is required."

At the nerve cell end, the machinery includes tiny acetylcholine-containing sacs assembled just inside the nerve terminal so that the neurotransmitter is released as soon as the nerve fires. And on the target cell end, several proteins, including the acetylcholine receptors, are highly concentrated at the synaptic site. The synapse also contains high concentrations of the enzyme acetylcholinesterase, which is needed to break down acetylcholine and terminate the muscle cell contraction once the nerve impulse stops. The question that then arose, according to neurobiologist Stanley Froener of the University of North Carolina, was, "How does the nerve tell the muscle cell to assemble the synapse?"

The initial experiments pointing to the involvement of agrin -- so called because it causes receptor aggregation -- in the formation of the synapse, were performed by McMahan and his colleagues at Stanford in the late 1970s. Over the years, the McMahan team built up strong circumstantial evidence that agrin is one of the major signals used by nerve cells to induce the formation of synaptic machinery at the neuromuscular junction.

The clinching evidence that neuronal agrin, rather than the agrin released by muscle, triggers the clustering needed for synapse formation, came in spring last year from antibody studies performed by the McMahan team at Stanford and by Monroe Cohen of McGill University in Canada.


Now that experiments have clearly indicated neuronal agrin helps establish the neuromuscular junction, researchers are beginning to speculate that the protein could play a broader role. They have found an active form of agrin, similar to that found in nerve cells that communicate with muscles, in the brain and spinal fluid of chick embryos.

"Is agrin involved in organising neuron-neuron synapses as we think it is in organising the neuromuscular junction?" asks Stanford neurobiologist Richard Scheller. "In that case, it certainly could be involved in learning and memory, too."

This raises the possibility that agrin is needed for synapse formation throughout the nervous system, say experts. The neuronal breakthrough does not, of course, mean that all the mysteries of nervous communication are solved. Researchers have still a long way to go just to work out how agrin exerts its effects.