A mango variety developed from Alphonso can withstand climate vagaries

The variety, a hybrid of Alphonso and a Mexican variety, is expected to boost mango production in country 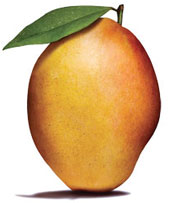 A new variety of mango, named Konkan Samrat, has been developed by a research centre in Maharashtra. The variety is a hybrid between the world-famous Alphonso (Hapoos) and a Mexican variety, Tommy Atkins.

The hybrid has been developed by Dapoli Agriculture University's Regional Fruit Research Centre (RFRC) at Vengurle in Sindhudurg district of Maharashtra after years of research.

According to Bharat R Salwi, associate director of research at RFRC, the new variety tastes very similar to Alphonso but has several advantages over it. It is more resilient to climate vagaries. “The Alphonso mango is sensitive to temperature variations and its production has decreased because of high temperature spells,” says Salwi. “Konkan Samrat is not just heat resistant but also does not develop spongy tissue (responsible for low production) during intense heat, which the Alphonso does,” he adds. “Another advantage is that it is a regular bearing variety—it bears fruit every year, as opposed to Alphonso, which yields fruit only in alternate years.”

The variety has a high production potential as well because its fruits are larger in size, weighing around 48 gramme on an average, and because of a cluster-bearing characteristic it bears larger number of fruits per panicle.

Salwi also says that the variety, which was first developed by crossing the two above-mentioned varieties in 1997, is a stable one and can be propagated by grafting. The fruit has been cleared for release by the Maharashtra Council of Agriculture Extension and Research in May this year.

The official also informs that the variety will be planted in different university campuses this year, and will be released to farmers next year.