A matter of timing 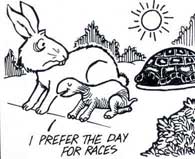 SLOW AND steady wins the race, goes the moral of one of the most popular of Aesop's fables in which an arrogant hare loses a race to a persevering tortoise. But, two US brain researchers say if the race had taken place at twilight instead of during the day, as in the story, the result would have been reversed because the tortoise is active during the day, while hares are at their most agile during twilight hours (The Lancet, Vol 341, No 8860).

Junichi Takeuchi and William J Schwartz of the University of Massachusetts Medical School say in humans, too, some abilities wane in the morning and others in the evening and contend some of the symptoms of jet lag, shiftwork, ageing and insomnia may be the result of upsetting the biological clock.