A measure of the dark force

A simple technique of checking out supernovae 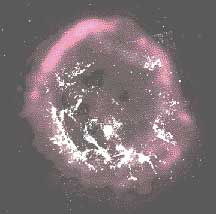 there is a mysterious 'dark energy' in the Universe, scientists know from observing exploding stars known as supernovae. This dark energy was first discovered in a landmark experiment in 1998 by a group of astronomers at University of Berkeley, usa. Since then theorists have tried to predict what practice has shown.

Now, a group of astronomers at the University of California, San Diego, usa, have come up with a new and elegant methodology to check the theories against observations and to help understand the workings of this dark force.

The presence of dark energy, which pervades the Universe, has been suspected for a long time. Einstein incorporated its effects in his theory of gravitation and showed that unlike gravity it generates an outward pressure on the universe thereby causing it to accelerate. What is surprising is that current observations seem to suggest that the current epoch is one in which the matter energy and the dark energy are curiously balanced. This cosmic coincidence needs to be explained by any consistent theory.

N Dalal and his colleagues, the members of the research team, have developed a new yardstick by which one can compare the various theories propounded by cosmologists to explain the presence and effects of dark energy. The method proposed uses just three parameters, the average density of dark energy, the average strength by which the dark energy accelerates the expansion of the Universe and the interaction between the ordinary matter and dark energy. With the observations, which are expected in the next few years, these three parameters can be easily measured.

With the measurements of these three parameters, one can check with the values predicted by the theories and hence decide on their validity. Astronomers feel that this could be an easy and accurate method of at least throwing some of the theories out when the observations start coming in (Physical Review Letters , Vol 87, No 141302, October 1).