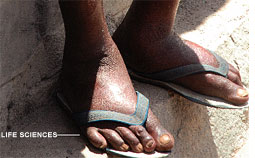 reemergence of the chikungunya virus in India in 2005--the first outbreak in 32 years--has baffled the medical community. It is a cryptic genetic puzzle with several plausible explanations but little evidence. The strain causing havoc in India is an African one, never virulent in India and not reported before 2000. There is also evidence of mutation in the strain between 2006 and 2007.

The last outbreak of chikungunya in the subcontinent occurred in 1973 in Barsi, Maharashtra. December 2005 saw a pandemic in Andhra Pradesh, Tamil Nadu and Kerala. The virus then hit Maharashtra and West Bengal. The reason for this outbreak has not been established. who says over 1.4 million cases of the disease were recorded between January 2006 and August 2007. Genetic mapping of the virus revealed the strain was not of the Asian genotype, responsible for the previous outbreaks. Instead, it was what is called the East Central South African (ecsa) strain, which in 2005 caused an epidemic in the Runion Island in the Indian Ocean.

A team drawn from research institutes in Puducherry, Tamil Nadu and Kerela studied 13 serum samples from suspected chikungunya patients. Nine samples tested positive for the virus; eight had the African strain while one had the Asian strain. "The new strain in India is very close to the ancestral stock of the Runion strain, which could have been transported to India by infected humans or by the vector," said N Pradeep Kumar of Vector Control Research Centre, Puducherry, who led this team.

While the African strain has not been formally reported in India among humans before 2005, its Indian sojourn might actually be older. "In 2000, we had taken a viral sample from a mosquito from Yawat in Maharashtra for some other studies. It had the ecsa strain," says Vidya Arankale, deputy director of the National Institute of Virology in Pune, told Down To Earth . Why the strain took half a decade before turning virulent is not known.

The story gets more complex when we look at mutations in the viral strains. To be effective, the strain that ravaged the Runion Island typically requires the carrier mosquito to have a certain level of cholesterol, which is found only in the Aedes aegypti mosquito. In 2005, the strain developed a mutation, called A226V, which made it 'cholesterol independent'. This meant the virus could piggyback on a wider range of mosquito species. The three-state study did not find this mutation in the ecsa strain present in India, though the ecsa strain had acquired mutations known only in the Asian strain of the virus. The plot thickens further: the National Institute of Virology, which had not found this mutation (A226V) in the African strain in 2006 samples, found it in 2007.

Kumar sounds a warning in his study: "The magnitude of the outbreak might be due to mutations other than A226V." The microbe is spreading far and wide, and adapting to local conditions by mutating. Vector-borne diseases will only increase with climate change. The three-state study and the Pune institute's work show Indian health administrators' job is cut out.