Who will join the dots and make it possible? 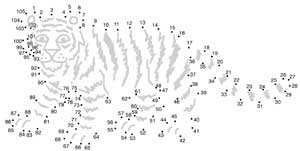 On August 5, 2005, the Tiger Task Force presented its report Joining the Dots to the prime minister. After a presentation by the task force's chairperson, and a subsequent discussion, the prime minister gave his assent to all seven recommendations the task force wanted immediate action on (see box: Get on with it). The 5-member task force was set up in March 2005, after media reported that tigers had disappeared from Sariska tiger reserve in Rajasthan, and a great furore broke out.

The report closely follows its terms of reference. For instance, it has suggested a new method of estimating tiger status; this will be tested when the tiger census begins in November, 2005.

The terms includes "measures to strengthen tiger conservation in the country". In this respect, it suggests institutional reforms, such as improving Centre-state collaboration among institutions that protect the tiger. Protection, it says, cannot be done by injecting more guns, more guards and more money into reserves. Sariska spent more on its tigers than all other reserves, yet the tigers disappeared. So the report suggests each reserve spruce up its management plan, a plan that takes the local context of protection into account. In addition, the report wants a fierce crack-down on wildlife crimes. The current enforcement mechanism is extremely weak; the report, therefore, suggests the criminal provisions of the Wildlife (Protection) Act, 1972 be amended as deterrant to protection.

The task force's terms of reference also include suggesting measures "to incentivise the local community in conservation of tigers", and come up with a "new wildlife management paradigm that shares concerns of conservation with the public at large".

In this context, the task force concludes that other tiger reserves are not as bad a shape as Sariska is in. But, it warns, a Sariska-like situation could develop in other reserves.

This, the report suggests, is because conservation as practiced today is exclusive in nature. Wherever forests are declared as areas protected for the tiger, people lose all rights. People living in the fringes of protected forests are hostile to conservation. Such a situation also develops because most tigers live outside reserves demarcated for them.

The report amplifies its argument using detailed research on a hitherto bedevilling aspect of conservation: the relocation of people from tiger reserves. The report finds that in the last 30 years, only 80 villages have been relocated. Today, there are 273 villages inside the core areas of reserves and another 1,214 in the buffer. In short, it concludes, whereas conservationists have always argued for relocation, the fact remains it is both a logistical and financial problem (see table: Relocation costs).

Conservation can thus only be 'inclusive'. If people, forests and tigers are to co-exist, then certain steps must be taken. First, villages located in habitats crucial to the tiger (natal areas) must be relocated, but only after a plan is made that has their approval. Second, the productivity of forests and pasturelands in reserve fringes must be increased. Third, through measures such as homestead tourism, or involving people in forest protection (in return for which service they must be paid), local communities can actively help protect the tiger.

"No report per se brings change," says the introduction. "It is people, who believe in the report and its ideas, who are the change-makers".