A nose for taste 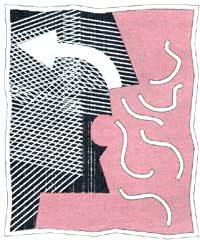 ENJOYING one's food is almost as dependent on the sense of P1 smell as on the tastebuds. In P-9 fact, it is the nose that first gets a whiff of aroma emanating from the meal, which if found appetising, makes the mouth water. Again, addition of saliva to food morsels in the act of chewing produces aromas that travel to the nose through the back of the nasal passage, dramatically enhancing flavour. Now, Deborah Roberts and colleagues at the Cornell University in New York have to devised an artificial mouth od simulate the act of chewing, to demonstrate the importance of the retronasal aromas, and the device might be particularly useful to the food industry (New Scientist, Vol 146, No 1975).

A food mixer coupled with a gas chromatograph makes up the artificial mouth. A water-based solution containing saliva salts and enzymes acts as artificial saliva which is then mixed with the food. The released aromas are fed into the gas chromatograph, which separates them into their individual components.

Each chemical is then cooled, moistened and fed to a human "sniffer" who defines the odour according to a series of specific descriptions, such as "fruity" or "smoky".

The "mouth sniffer" has already picked out flavour compounds added in known quantities to food, and has also identified the chemical that give raspberries their "floral" flavour. The researchers' next task is to find out why low-fat foods often taste worse than their full-fat counterparts - could it be that the full-fat foods trap some of the less desirable aroma compounds, which are released once the fat is removed?

It's really a challenge to food product developers first to try to work out what flavour compounds are important in full-fat foods, and then to see what's different in their reduced fat counterparts," says Roberts. "Once you know what is it that's causing the off-note, you can look at what ingredient is responsible and do a reformulation to try to minimise that."