A plea from the Bhasha-dam affected 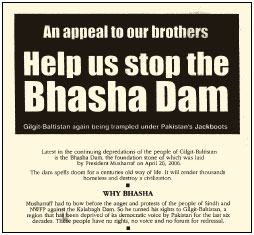 On May 13, 2006, the English daily, The Pioneer, carried an advertisement from Pakistan: an unlikely source, notwithstanding the recent thawing of diplomatic ice between the two neighbours. The ad is ostensibly a plea from people who are likely to be affected by the Bhasha dam in Gilgit and Baltistan. But there is more to it. Pakistan administers Gilgit and Baltistan, but India has never recognised its neighbour's sovereignty over these areas. In recent times, a separatist movement spearheaded by the Balawaristan National Front has acquired some force in the region. It's this front, which has issued this ad.

The advertisement for most part is a litany of the damages which the dam could cause. The recent uproar over the Kalabagh dam in the North Western Frontier Province has forced the Pakistan government to shift focus towards Bhasha. Pakistan president Pervez Musharraf laid the foundation stone for the dam on April 26, 2006. The dam will displace some 40,000 people, inundate around 13,000 hectares and submerge the ancient town of Chillas, the ad complains. Ancient rock carvings and Archaeminide period settlements will go under water.

And then there is a plea: "Wake up Indiayour territory is again being usurped by the Pakistani Army." The plea is again a reminder that ecological -- or even humanitarian concerns -- in the subcontinent are rarely innocent of cross-border political complications. And is it mere coincidence that the ad appeared in The Pioneer, a daily known for its ultra-nationalist standpoint?