A quest for the best 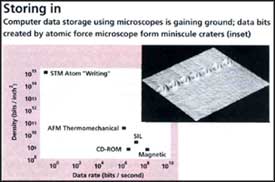 TREMENDOUS advances in computer technology have been the order of the day in the last decade. The machines have become faster, more robust and capable of handling much more data than before (Science, Vol 269).

For instance, the latest Intel 80586 chip (Pentium) works at almost 100 MHZ, compared to the last generation of 80486 chips which were running at about half that speed. Advances in display, networking and data storage technology have made today's machines extremely versatile. While a few years ago, magnetic hard disks had a capacity of about 20 megabytes (or 20 million bytes, a byte being an unit of information), today disks of 540 megabytes are ubiquitous. Even more impressive has been the development of optical CD-ROM (compact disc-read only memory) drives, used to store software and data upto 640 megabytes in a compact disc.

Impressive though these advances are in data storage, they are still not enough. Programmes, databases and applications are being developed which require much more data storage capacity. The CD-ROM or a magnetic hard disk stores a single unit of information on an area of about one millionth of a square metre. The challenge has been to reduce the size in which the memory stores the ififormation and allows access to it at a high speed.

Recently some groups - working separately at IBM Almaden Research Center, Stanford University and Sony Corporation - have reported combin- ing high resolution optical microscopes and high speed magnetic drives to make the bits as small as 300 nanometres (I nano-metre is a billionth of a metre).

The groups have reported gne ic that these high density storage devices also allow data retrieval (reading and writing'of data on the disk) at 8 milliorl bits per second, faster than a CD-ROM.

Conventional magnetic drives write by using a magnetic head over a film. The magnetic field changes rapidly and the small region of the film gets magnetized. The IBM team used a variation of this technique with the help of a specially designed optical microscope. This microscope uses the solid immersionlens which focuses light from an infra red laser to a point on the lens bottom. While most of the light is reflected back, some of it tunnels through upto 150 nanometres from the lens. This light can be used to heat a small spot on a magneto-optic disk. When the spot cools, it can take the magnetic orientation of the field of the magnetizing head.

This transition can then be read by a laser because the magnetic orientation changes the polarisation of the laser light reflected from the surface. However, speed is a problem. The method used in,the past had the disk spinning on an air cushion at 420 revolutions per minute, allowing the head to stay close to it. This could achieve data density 4 times higher than before, but the access speed was low. The trouble was that spinning the disk faster than this pushed the head further than 150 nanometres from the surface.

The Stanford team used a different technique. They reshaped the lens to allow' more light from the laser and thus could move the head further from the disk. As a result, they could achieve speeds upto 8 million bits per second. They also enhanced the data density by using a green laser which has a shorter wavvlength and can thus make a smaller spot on the disk.

But that is not all. IBM and other teams are also working on other microscopes to increase the density and speed of data storage devices. One of the promising technologic3 uses the atomic force microscope which has extremely tiny tips (about 10 nanometres) and thus can be used to make much smaller bits. The holdup here again is speed, with the best technology only giving about 1.2 million bits per second. Researchers are trying novel methods to increase this but it may be some time before they are successful.

The data storage market is worth about us $40 billion worldwide., And this is providing the incentive to most big hardware manufacturers. As computer applications become more sophisticated, the software used will become bigger and need faster access; powerful microscopes, therefore, might hold the field in future data storage technology.