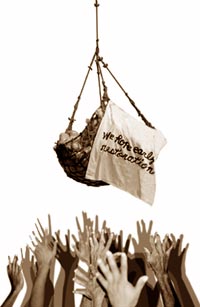 centrally sponsored Calamity Relief Fund (crf) has come in for sharp criticism for its "skewed" method of determining fund allocation for various states, based on their past ability to spend. That's why, during 2000-2004, economically advanced states like Gujarat, Maharashtra and Punjab had higher allocations than Orissa, Bihar, Madhya Pradesh, Assam and West Bengal, says the Centre for Budget and Governance Accountability (cbga), a research group in Delhi that monitors fiscal instruments.

"The fund is not a need-based one and also doesn't take care of a state's ability to spend money on relief as well as the frequency at which calamities strike it," says Subrat Das, a researcher involved with what is the first assessment of crf by civil society. cbga recommends an overhaul of the Rs 11,000 crore scheme (see box: A state of calamity).

crf has a limited scope, the yet-to-be published assessment says. It covers only six calamities, whereas protection is required for at least a dozen. The Union home ministry is the nodal authority for crf; state governments implement it. Finance commissions provide operation guidelines. crf's structure is based on recommendations of the 11th Finance Commission, in operation till March 31, 2005.

cbga wants crf, the only such fund states can access, secured from political interference. For instance, in 2001-02, Andhra Pradesh had only six per cent deficient rainfall, but walked away with a relief package of Rs 148 crore and 3 lakh tonnes of rice. Rajasthan, on the other hand, failed to get any additional assistance from the Centre that year, despite a third successive drought. "I can't say that political considerations don't play a role. But the crf is a very small fund and needs to be strengthened," says Michael Vetha Siromony, former director of the Union home ministry's national disaster management division.

The assessment is opportune. Union home minister Shiv Raj Patil recently declared India would unveil its national policy on disaster management. Besides, the 12th Finance Commission is due to come out with its recommendations; these take effect next fiscal year and will be valid for five years.
The draft national disaster management policy also mentions the need for radical changes in the financial mechanism for relief and disaster mitigation(see box: Turn around). It talks about the need to keep aside a specified amount, from various development programmes, for disaster preparedness and relief. A high-powered committee set up in 1999 by the Union government to study disaster relief and mitigation had a similar suggestion -- 10 per cent of plan funds at the national, state and district levels be set aside for schemes specific to disaster mitigation preparedness.

The draft policy also suggests enacting a national law institutionalising all existing mechanisms. But if it legalises the crf mechanism as it is, all its flaws would perpetuate. "The best way to take care of such confusion is to establish a national fund for disaster relief, with a mechanism," says N M Prusty, chief, emergency and rehabilitation, care India. While the crf is just a disaster relief fund, the new fund, explains Prusty, will be a consolidated one with rapid access provision. "In this fund, all the crf flaws can be amended," he says.