A shot in the arm for abandoned vaccine trials

With HIV spreading fast in some Third World nations, these countries have decided to end months of uncertainity by opting for vaccine trials rejected by the US 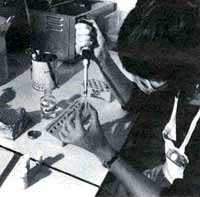 There has been a new twist to global efforts for combating aids. Brazil, Thailand and Uganda plan to begin large-scale trials of 2 hiv vaccines although the us had called a halt to its experimental vaccine trials earlier this year. The present controversial decision was taken at a World Health Organisation (WHO) meeting mid-October following ravages caused by the hiv virus in these countries. Edward Mbidde, chairman of Uganda's national aids Research Committee, pointed out in New Scientist: "We are seeing the epidemic. The speed and direction in which to move must be assessed country by country."

Aids vaccine trials have been languishing for some time. Though the 3 countries had been awaiting trials since 1991, their plans came a cropper early this year when the us decided to suspend its own trials. There was little justification, said activists, to undertake expensive and politically sensitive trials for a disease which was not a major threat in the us. American scientific opinion also was against further trials until there was more information about the vaccines.

Brazil, Thailand and Uganda however, took a different stand, although they did not percieve themselves as guinea pigs any more. Mbidde points out that trials in developing nations would have to be accompanied by intensive educational campaigns warning people that the vaccines are only at an experimental stage. Among the necessary steps, volunteers should be warned to take the usual precautions to minimise risk of infection.

Since the vaccines made by us companies Genentech and Biocine are based on "subtype b", the trials are likely to begin first in Thailand and Brazil where infection by the subtype b strain of hiv is more prevalent. As a preventive step, the vaccines will be tested for safety and their ability to produce an immune response. The who assumes that the vaccines' efficacy tests against infection would only be conducted in 1996 at the earliest

The decision of the 3 countries to go ahead with vaccine trials should be proving fruitful for Genentech and Biocine, who might otherwise have been out of the aids vaccine research arena altogether. Genentech has spent over $100 million on aids vaccines to date, and preserves 300,000 doses in cold storage. It only remains to be seen whether the user countries will actually reap benefits from these vaccines.