A stale session of scientists

The 81st session of the Indian Science Congress failed to inspire interaction among scientists and was reduced to a forum for criticising the state of Indian science. 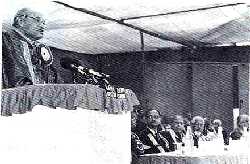 SINCE Independence, India's prime minister has delivered the inaugural address at the annual session of the Indian Science Congress (ISC). In recent years, a regrettable trend has been the tendency of the gathered scientists to forget this speech. The 81st session of the ISC, held in Jaipur from in January, was no different.

Given the imminence of a world regulated by the General Agreement on Tariffs and Trade, Prime Minister P V Narasimha Rao dwelt upon the implications of emerging international economic systems for Indian scientists. Referring to the session's theme -- Excellence and Accountability in Indian Science -- Rao warned that unless Indian scientists put "their act together fast, they may be reduced to pariahs in the brave as well as grave new world".

Cautioned Rao, "The race for the survival of the fittest may force the West to adopt a protectionist attitude, thereby denying India crucial technologies" related to agriculture, textiles and services. "Unless we drastically improve the quality of our basic research, and hence produce superior goods at competitive prices, we have no chance of competing with the developed world," he remarked.

Rao said it would be imperative for Indian scientists to collaborate actively with private industry, which should acquire a "more technology intensive outlook and seize the initiative to define goals and set targets for the country's scientific community". With the usual homily following the all-round admonition, Rao reposed faith in the "genius of Indian economists and scientists to meet the new challenges".

Most scientists saw in Rao's speech a clear pointer that Indian science would have to look for its own finances. But this did not motivate them to discuss how they could collaborate with industry. There was just one prominent exception: M Vidyasagar, director of the Centre for Artificial Intelligence and Robotics in Bangalore, welcomed GATT "as a gateway for foreign industries to exploit the commercially orphaned Indian scientific research".

Most delegates revelled in self-pity as they poured out their frustrations. P N Srivastva, the general president of the congress, lambasted the scientific community and bureaucracy for the sorry state of science education. He debunked the claim that India has the third-largest scientific humanpower, saying if the figure is based on number of scientists per thousand, then it comes to 4.5 for India, 111.14 for Japan, 262.4 for Sweden and 184.8 for Canada.

Almost all speakers expressed their angst over the deplorable state of Indian science. Planning Commission member M G K Menon accused the government and the scientists of fostering an atmosphere of secrecy. P J Lavakare, formerly with the department of science and technology, referred to the lack of marketable products developed. A S Paintal, former director of the Indian Council of Medical Research, said the trials of contraceptive vaccines were "unethical" as they could harm women.

That all was not wrong with Indian science was indicated by, among others, A P J Abdul Kalam, scientific advisor to the Union defence ministry. He said the Defence Research and Development Organisation, during its vaunted missile development programme, had developed expertise for an advanced but cheap pacemaker and light artificial limbs. Rama Rao, secretary of the department of science and technology, said a Rs 1.5-crore network to monitor even minor tremors will become operational in the Latur region in February.


However, information of achievement was little and far spaced out. Routine sessions were marked by routine reiteration. At the Session for Young Scientists, expectations of increased government funding to enable foreign visits were aired. The young scientists deplored the lack of facilities in their institutes.

Not only was there any interaction among the scientists of different disciplines, even the sexes seemed unprepared to mingle. The sessions on "Women and Science" were almost completely devoid of men. The Jaipur meet was proof that the prestigious event on the Indian scientific calendar ceased being a heady affair a long time ago.