A step too small 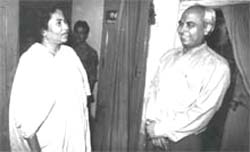 it was inevitable. The international prices of oil rose. And on September 29, 2000 India followed suit and hiked the prices of all petroleum products. The hike, the government estimates, will help mop up an additional Rs 7,580 crore during the current fiscal year. Diesel's pre-tax price increased by Rs 2.30 a litre, petrol by Rs 3.60 a litre, kerosene by Rs 2.30 a litre. But experts feel that the price hike in the case of diesel and kerosene is too little and has arrived too late.

Adding fuel to the fire is the "unjustified demand" made by Mamata Banerjee, the Union minister for railways. A day after the hike, she threw a tantrum. Then ensued the usual threat of resignation. She wants a roll back of the price rise, particularly in case of diesel. She says the rise is against public interest, suggesting that the price hike will consequently raise railway fares. Experts say its all a sham. Banerjee should realise that her charade of being pro-people will have grave consequences for the environment. "A roll back of the diesel price would mean unabated increase in the number of diesel vehicles, adding to the pollution on our roads," says Anumita Roychowdhary, coordinator for the campaign for clear air of the Centre for Science and Environment, a Delhi-based non-governmental organisation. According to her, the hike is not sufficient enough and these 'dirty fuels' should be priced higher in order to discourage their consumption.

"The theory of the price hike being anti-poor propagated by some politicians is not acceptable, as there are no clear cut economic evidences to support this," says Shreekant Gupta, professor at the Delhi School of Economics. "When will the government abolish the administered price mechanism and let the market forces decide the prices," he questions. Bibek Debroy, director for research at Delhi-based Rajiv Gandhi Foundation says, "The decision is not based on rational thinking and logic. There should be a further hike of prices." Despite the hike there remains a wide gap of Rs 16 per litre between petrol and diesel. In India, diesel is under-priced as compared to international market rates, while petrol is over-priced. This encourages consumers to opt for diesel. A cabinet decision in November 1997 had stated that diesel prices will be brought at par with the world prices. But despite a 30 per cent rise in international prices, the Indian government stood paralysed. "Diesel prices should have increased after the 1997 decision," adds Debroy.

H B Mathur, a former professor at the Indian Institute of Technology, points out that the disparity in oil pricing is responsible for a major set back to the Indian economy. "Only when the government is confronted with a crisis, there is a talk about the use of alternative fuels," says Mathur. There are others who feel that a dual pricing system should be created for diesel vehicles whereby cars will be charged more as compared to public transport. "If the prices are hiked further, freight transport will shift from road to railways. Consequently it will reduce fuel emissions. It would encourage more use of public transport and reduce heavy traffic on the Indian roads. The government should also abolish subsidies," says Roychowdhury.

The biggest diesel consumers are the heavy commercial vehicles and not the farmers with pumpset and tractors, unlike what our politicians will like us to believe. Mathur says, "The poorest of the lot do not, in fact, benefit at all from the diesel subsidies." Instead, the nation suffers the burden of a bludgeoning oil pool deficit wiping off the nations foreign reserves. The deficit wiped out Rs 24,000 crore of foreign exchange earnings of the nation. It does not make sense to bleed the nation for the benefit of a miniscule section of the society-- a section which is affluent and well capable of paying for the damage they do to the environment. There is certainly a way out. Instead of being blindly led by the international market forces, India should take the lead. The prices should not be managed at the last moment when the need arises. The government should evolve a well thought fuel pricing policy and raise the diesel prices, consequently helping the environment as well as the economy to improve simultaneously. Alternate fuels must find place in the policies of the government, says Mathur. Other developing countries like Brazil have already switched over to alternative fuel technology. If they can do it, why not India?