A subject: a human being 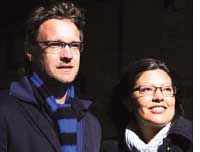 An Australian documentary that premiered at the Sydney Film Festival in July has ignited a controversy with its claims on slavery in the refugee camps of western Sahara. The protagonist has denounced the film for portraying her as a slave. The 80-minute film, by Sydney-based Violeta Ayala and Dan Fallshaw, is set in refugee camps in south-west Algeria, where 160,000 Saharawi people have lived since the 1975 Moroccan invasion. It features the story of Fetim Sellami and her family, who live in a refugee camp.

"We wanted to highlight the refugees' struggle through one family's story. We did not set out to make a film about slavery. It was only disclosed to us after three trips and two months in the camps," said the filmmakers. But the subjects of the film are scathing in their criticism of this documentary. "The film has affected my community," Sellami told IPS news agency.

The filmmakers are firm on their stance. "While filming, we discovered slavery existed. We want the story to speak for itself," Ayala said.