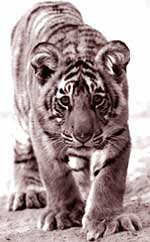 Is there an apt metaphor to evoke the moment of this publication? I wonder, as I go through the report Contested terrain: forest cases in the Supreme Court of India . There is no doubt this report is timely. At a time when the country's executive -- also conservationists and environmentalists -- have gone into a tizzy over missing tigers, this compendium peeks into some of the most important Supreme Court (sc) cases that have redefined forest and wildlife management, impacted millions and also (arguably) redefined boundaries between the executive and judiciary.

When this review gets published, the courts will be closed for summer vacations. But the moment they get back to work, our judges will be deluged with matters of forest governance. In the frenzy and seriousness with which courts today handle, hear and dispose off forest- and wildlife-related cases, it's difficult to remember the beginning of the era, which some critics term 'judiciary's green activism'.

That year, one T N Godavarman Thirumalpad, distressed by illicit felling of trees in his ancestral land, filed a letter petition in the sc. The court turned the letter into a public interest litigation (pil). And today, the case has become an umbrella under which all forestry-related cases are argued. As the report mentions, "it's arguably the largest ever case to be litigated in India, not only in terms of sheer quantity (the number of pending/disposed intervention applications has crossed twelve hundred) but also the myriad issues...which today redefine... forests".

The authors work on a simple premise: to breach the wall of silence and secrecy that surrounds all forest cases pending before the sc. "In cases labelled pil, affecting rights of millions of people... access to court documents is denied on the grounds that they are not party to the case", the report mentions.

The authors try to get around this predicament by digging deep into available repositories. Lawyers themselves, Shomona Khanna and T K Naveen sought help from a few colleagues. And the result of this collaboration is a brilliant document.

The authors deserve praise for the sheer volume of cases included in the report. It lists all the petitions that have come in the Godavarman case. The compendium also synthesises the major issues that the cases evoke. One of the far-reaching implications of the Godavarman case has been the way in which it has altered the definition of forestlands (and therefore where forest-related laws are enforceable). The report does a comprehensive thesis on this, follows it through with various orders of the court and then goes on to analyse the court room deliberations over the issue. All this is important, for these deliberations are poised to reshape the way India looks upon forests, ethically as well as administratively; they impinge on the issue of compensatory afforestation for diversion of land.

The report's third chapter ploughs the politically more sensitive issue of encroachments and forest rights. The authors have scanned hundreds of pages of documents, which people at large would never have had easy access to, and pieced together the debates as they have progressed in the court rooms. How exactly did each state intervene? What has been the position of the Union government? Has it remained consistent or has it changed? The reports of the Central Empowered Committee (a body created by the sc to advise it on all forestry-related cases) on encroachments have been put to scrutiny, as are interventions of the amicus curiae (friend of the court) in the matter.

These facts would have remained inaccessible to most. But for those who wish to go beyond the obvious and read intent into the decisions, the report leaves many windows open. It almost invites the reader to dig beyond the written. The authors have been, typical of their profession, pithy in making comments about the going-ons but they do leave enough hints and messages for those who are nifty enough to pick them up.

The report is priced at Rs 50 and you can request a copy from the Society for Rural, Urban and Tribal Initiative, Q-1, Hauz Khas Enclave (first floor), New Delhi, 110016.