Cap on subsidised cylinders raised to 12 per year 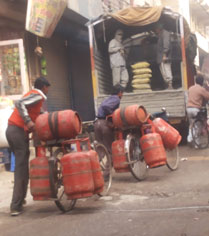 In a Cabinet meeting on Thursday, the Congress-led UPA government at the Centre decided to suspend its ambitious project of transferring subsidy on LPG cylinders directly into the accounts of consumers. To avail the subsidy, all consumers were required to get their Aadhaar or unique identification number linked to their LPG consumer number and bank accounts. Besides, the Centre has also decided to raise the cap on subsidised cylinders from nine to 12 per year.

Speaking to mediapersons after the meeting, oil minister Veerappa Moily said the Cabinet has decided to set up a committee to review implementation of direct benefit transfer for LPG (DBTL). Based on the committee report, the government will improve or rework the scheme and will then implement it. “All schemes are meant for people and we don't want even a single consumer to suffer”, he said.

The oil minister who had been firm on his commitment to implement Aadhaar-based LPG subsidy transfer despite the Supreme Court saying it is optional  was seen to be taking a U-turn today. He said that with the increase of cylinder cap to 12, the government is going to incur an additional Rs 5,000 crore annually.

Moily said, “the consumer, who has exhausted his or her quota of nine cylinders, would get two more subsidised cylinders by March 31. From new fiscal starting April 1, consumers will get one subsidised cylinder per month. The whole system will work as it was before introduction of DBTL.

The decision has been taken following interventions by UPA vice-president Rahul Gandhi and complaints by the senior party leaders that the scheme launched to benefit over 150 million customers would affect the party’s prospects in the coming general elections.

As per media reports, Moily was initially reluctant on raising the cap. He argued that average LPG consumption per household was seven. However, his argument was not heard; during the All India Congress Committee (AICC) session earlier this month it was decided that reducing subsidized LPG cylinder entitlement per household would have a negative impact on the party.

DBTL was launched by the UPA government on June 1 last year in 18 districts across the country. The government had claimed it to be a success with more than 1 million direct cash transfers to consumers’ bank accounts. It had said that sum of Rs 41 Crore has been transferred to the accounts of LPG consumers in these districts and that the scheme is going to be a game changer.

The Union ministries of petroleum and natural gas (MoPNG), finance, and the Unique Identification Authority of India (UIDAI) had taken several initiatives to make the processes simpler and to expand the reach of DBTL to all LPG consumers. MoPNG along with oil marketing companies and banks have launched multi-pronged efforts to educate  consumers to link their Aadhaar numbers to LPG consumer number and bank accounts through advertisements, SMS and emails.