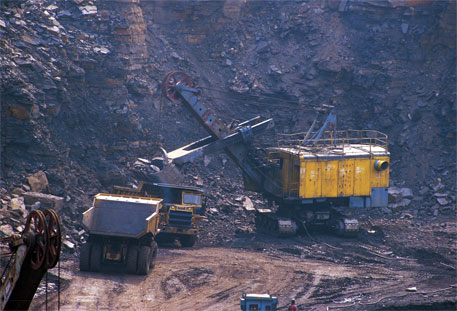 An underground coal fire that has been burning in Jharia block in Dhanbad district of Jharkhand for almost a century now led to an accident on Sunday morning. Nearly 52 houses were destroyed in the fire that left eight people injured.

The incident occurred in Agpathri basti, located adjacent to a colliery in Katras block. Around 2 am, the houses began to subside as the fire had weakened the surface of land on which they had been built. “There was an outburst of gas from the ground, followed by sudden subsidence of houses. I was the first to notice it and raise an alarm,” says Yamuna Yadav, a resident of the basti.

The village has been living under the fear of being destroyed by the underground fire since February, 2013. Last year, the director general of mines safety (DGMS) had declared the basti dangerous for human habitation and had ordered immediate evacuation. The residents, however, refused to relocate as they did not want to leave their livestock and livelihoods behind.

There are altogether 113 houses in the basti, including families of 12 employees of Bharat Coking Coal Limited (BCCL), the coal company that has been operating the mines in the Jharia region.

A few days earlier, the residents had claimed that minor cracks were developing on the floors of houses. The information was given to BCCL authorities that later sent a team for inspection on Friday. However, no immediate evacuation was ordered.

After the houses subsided, rescue work was carried out for a day by BCCL team so that residents could locate their valuables and pull them out safely. “The ground can collapse anytime and these houses have developed major cracks, thus making the entire operation risky,” says K D Prasad, assistant manager at BCCL.

The government-constituted Jharia Rehabilitation Development Authority (JRDA) team rushed to the basti along with BCCL rescue team. “We are shifting entire residents of the basti to nearby colony Belgaria,” says Gopal Ji, resettlement and evacuation in-charge of JRDA.

BCCL is providing one bedroom living space in Belgaria for residents living on the surface above Jharia underground mines.