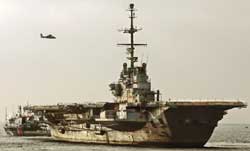 For the third time, Le Clemenceau has been forced to turn back and return to France. The French government summoned the decommissioned ship back even though France's defence minister argued that there were no suitable scrapyards in Europe.

Clemenceau had been waiting outside Indian territorial waters for permission to dock in Alang, Gujarat, for a couple of weeks ('Brinksmanship', Down To Earth, February 28, 2006). But Paris decided to recall the ship in view of the fact that French President Jacques Chirac was to be in India to sign some important deals. Chirac later signed agreements on exchange of civilian nuclear technology, the sale of French aircraft and military co-operation.

The French government has also said that it will now explore ways of reforming France's policy on waste export. It will set up a panel of ministers to examine how to manage maritime wreckage with partner countries.

As environmental groups like Greenpeace celebrate France's decision, the shipbreaking industry in Alang, where the ship was to be dismantled, has berated the decision. The industry has been in the doldrums for almost three years now and shipbreakers fear this decision might sound its death knell.

Meanwhile, as if on cue, the abysmal safety and environmental standards in Alang once again made headlines when a fire broke out on one of the beached ships during cutting operations, injuring at least nine labourers No improvement at all).

Since its inception, the shipbreaking yard has been beset by accidents and environmental disasters but even after a decade, conditions remain unchanged.