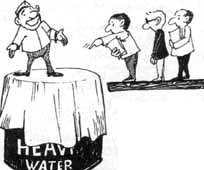 The Indian government has once again rejected an allegation that 27.5 tonnes of heavy water produced in Norway was diverted from Romania and Germany to India. Atomic Energy Commission chairman P K Iyengar said in his reply last month to the Norwegian foreign office India produces and even exports heavy water and there was no need for it to acquire Norway's heavy water.

Norway's foreign minister Thorvald Stoltenberg had in September asked India what it had done with the heavy water, assuming the heavy water had reached India because it is not a signatory to the Nuclear Non-Proliferation Treaty (NPT). Stoltenberg also wanted Prime Minister P V Narasimha Rao's help to begin "negotiations" for the "return" of the heavy water. Norwegian public prosecutors are believed to have produced evidence the heavy water was sold by cash-strapped Romania in 1986 to India for its nuclear programme.

Iyengar dismissed the whole matter as absurd. When the theft was said to have taken place, India had plenty of heavy water. Presently, India has a surplus of 500 tonnes of heavy water. Why would India want to steal Norway's heavy water under such circumstances, asked Iyengar in the rejoinder to the Norwegian allegation.

Iyengar suggested the missing heavy water could have been sent to other countries in the region. He said it was unusual Norway's supplies to Germany and Romania were not subject to International Atomic Energy Agency inspection, as should have been done in the case of a country that is a signatory to the NPT. Iyengar reportedly objected to India being imputed as the destination of the heavy water consignment on the basis of information supplied by countries who he says are known for violating norms of export and import of sensitive material.