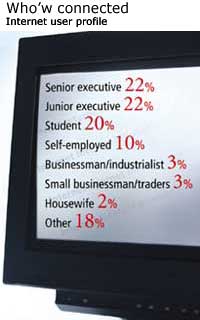 According to Internet World Statistics, India has a huge 40 million Internet users but that represents just a meagre 3.6 per cent of the country's population. But the number of users is fast exploding and the Internet & Online Association of India expects the number to surge to a 100 million by 2007.

Even with millions of web users in its cities, the Internet penetration rate for India remains well below five per cent. The greatest growth in usage is in increased time spent online by established users only. Eighty per cent of web users in India have been online for more than three years.

JuxtConsult, a research firm based in New Delhi, surveyed urban Internet users in April 2005, studying a group of 30,000 Indian web users about their lifestyle and their web use. They found that there are about 17.5 million urban Indians who use the Internet consistently, with an additional 5.2 million who use it occasionally. Though they may still be relatively few in number, these users are dedicated to the Internet.

The combined 22.7 million users make up only nine per cent of all urban Indians. Since Internet usage is negligible in rural areas, the penetration rate for the entire country comes out to just two per cent. This is in line with earlier estimates of 21.3 million internet users in India for 2004, representing two per cent of the population. India falls way behind many other major nations when it comes to Internet penetration.