Gogoi was visiting flood-affected areas in Assam; Agrawal is fighting land grab by industries in Chhattisgarh

Two activists, one leading an anti-dam stir and the other land grab by industrial houses, were attacked in separate incidents. Akhil Gogoi was attacked with sticks and sharp weapons in Assam while Ramesh Agrawal was shot at in Chhattisgarh. 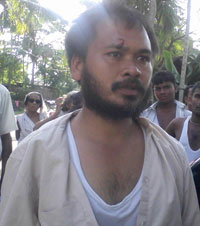 Gogoi, leader of Krishak Mukti Sangram Samiti's (KMSS) from Assam, was attacked in Dharmapur taluka in Nalbari district on July 6 while he was taking stock of the flood situation. He sustained severe head injuries. He was allegedly attacked by Youth Congress leaders. Gogoi, however, claims that the real culprit behind the assault was the state’s agriculture minister, Nilamani Sen Deka. The minister refuted the allegations and blamed the local Asom Gana Parishad leaders for the attack.

According to Gogoi's supporters, he visited the affected flood area based on the state water resources ministry's information that 10 out of 12 embankments in Nalbari district had been breached by the tributaries of the Brahmaputra river during the heavy rainfall in the past seven days. At least 50 villages have been submerged by the waters that breached the embankments.

“Almost the whole of Tuli village in Dharmapur taluka is inundated by the flood waters when an embankment gave in to the rising waters of the Pagladiya and the Noona rivers. Gogoi was attacked by a mob which we suspect as the local Youth Congress leaders. The mob asked him not to step into Dharmapur area. They also snatched the cameras belonging to the media persons present there and asked them not to report about the breaches,” said a Gogoi aide. He added that all the embankments were breached because of the sub-standard construction by the local irrigation department. The police have so far arrested Tapan Barman, Congress party councillor, in connection with the case.

The death toll due to floods in Assam has risen to 121. A total of 21,374.15 hectares of agricultural land is under water in the state. The Central government has marked Rs 800 crore for relief and rehabilitation.

In another incident in Raigarh city in Chhattisgarh, Ramesh Agrawal of Jan Chetna, a non-profit, was shot at on July 7. He suffered two fractures as a bullet pierced through his right thigh. 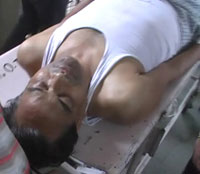 According to Rajesh Tripathi of Jan Chetna, two people entered the office and threatened Agrawal with a gun on writing against industries. The activist was hurt in the scuffle that followed. Agrawal has been fighting against big industrial houses in Chhattisgarh, including the Jindal group. In February, the National Green Tribunal set aside the environmental clearance granted to the coal mines of Jindal Steel and Power (JSPL). It was Agrawal who had filed this case way back in 2008.

He was also arrested in May last year after JSPL filed a case against him and a fellow activist Harihar Patel. Raghubeer Pradhan of Ekta Parishad a consortium of NGOs, who had also suffered a similar attack a few months ago says, “Clearly someone is trying to erase voices that are working for people, land and forests. We need to nail them down.”