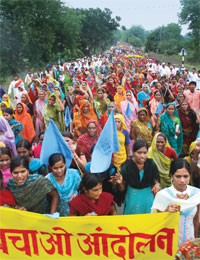 A GROUP of activists has urged Prime Minister Manmohan Singh not to lift the stop-work order issued by the Union Ministry of Environment and Forests on the construction of Maheshwar dam in Khargone district of Madhya Pradesh. It says the stay should remain till the affected people are rehabilitated.

On March 24, the Narmada Bachao Andolan (NBA) wrote a letter to the prime minister, alleging former Madhya Pradesh Chief Minister Digvijay Singh was trying to convince Manmohan Singh to revoke the order on the dam. The group cited a letter written by Digvijay Singh to the prime minister last year, which was obtained through right to information (RTI).

The letter by NBA states barely 10 per cent of rehabilitation has been completed. “But 90 per cent of construction at the site is complete,” says NBA activist Alok Aggarwal. Why else would the ministry issue a stop-work order, he adds. The order was issued last April, after it was found that Shree Maheshwar Hydel Power Corporation had failed to rehabilitate 70,000 people whose homes or land will be submerged by the 400 megawatt hydroelectric project on the river Narmada. In its defence, the developer said NBA has misrepresented facts.

The Central Electricity Authority had cleared the state project costing Rs 1,673 crore in 2000. But Rs 2,800 crore has already been spent, with the developer carrying a monthly interest burden of about Rs 22 crore. “All the more reason the state should expedite resettlement,” says Aggarwal. Instead, the state authorities have arbitrarily requested the Centre to allow filling of a reservoir, starting with upto 154 metres—a level, the state claims, will not submerge any home. The three-stage filling is nowhere mentioned in the project documents, says Aggarwal. The Prime Minister’s Office is yet to decide on the matter.