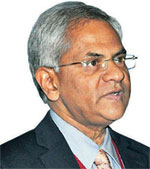 Union health secretary, Keshav Desiraju, was transferred to the Union ministry of consumer affairs as secretary on Wednesday. Lov Verma, secretary of department of AIDS control, was given the additional charge of health secretary’s post on Thursday. Desiraju, who happens to be grandson of former president S Radhakrishnan, had taken charge as health secretary barely 11 months ago.

Union health minister Ghulam Nabi Azad termed the transfer as a "regular affair" while speaking to the media, but the hasty manner in which the transfer was effected, has led to concerns in the health sector. It widely believed that the transfer happened because of disagreements between Desiraju and the health minister over appointments in the Medical Council of India. The move is seen as hasty because at the time of Desiraju’s transfer, no replacement had been decided upon.

Jan Swasthya Abhiyan, the Indian circle of the worldwide People's Health Movement, expressed its concern over the manner in which the transfer was done. "It is precisely such cavalier transfers that undermine the ability of public institutions to perform their tasks in an honest, transparent and efficient manner. The transfer of Desiraju, in fact, is a violation of the spirit of the Supreme Court's ruling of October 2013 wherein the court had asked the Centre and all state governments to take steps within three months to insulate the bureaucracy from political pulls and pressures, and further to ensure fixed tenures for serving officers," a statement from JSA said.