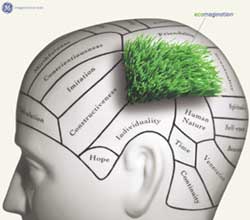 One example is bp, whose " bp on the Street" interviews on energy and environment have been a part of its corporate advertising. bp is also running two to three-page ads in major newspapers devoted to alternative energy.

Companies whose image has been tarnished by environmental disasters are also taking on the sarcasm and running green ads. Ford Motor, often accused of manufacturing gas guzzlers, has been running ads promoting its lines of hybrid and flexible-fuel cars.

And of course, Exxon Mobil, still plagued by references to the Alaskan oil spill, has made environmental issues the cornerstone of the "advertorial" columns which run on op-ed pages.

The decision to spend money on this makes business sense. Oil companies, which are under attack for reaping windfall profits from soaring fuel prices, are trying to portray that they are the solution to energy problems and not the cause. Companies are trying to win over socially conscious investors in order to make them buy their products.