Against slavery of a new kind 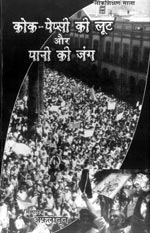 Coke-Pespi ki loot aur paani ki jung (Coke-Pepsi's loot and the war for water) is meant to serve as a toolkit for all those battling against multinational corporations as well as the cola giants. The articles are hard-hitting though at times repetitive. The reason: possibly the fact that they are all woven around a single theme -- the fight against privatisation of water, and the question of ownership. Who are the rightful owners of water, the needy local community or the exploitative large corporations?

This book is a compilation of Hindi translation of various articles. Through it the publishers have attempted to bring together various voices and success stories in the fight against multinationals. The publishers promise more. According to them, the endeavour is to create, through information, an alternative political movement against what they dub "slavery of the new kind". In fact, the aim of the book is to realise the motto, "Coke-Pepsi, quit India".

The book is a treasure trove of some rare bits of information. For instance, not many are aware that the entry of Pepsi into India in 1988 was subject to various conditions and promises made by the company. One such major claim was employment generation -- 50,000 jobs in the entire country and 25,000 in Punjab itself. "These promises were never kept," writes Kanawaljit Singh, director, Public Interest Research Group, New Delhi, in his article, 'Bharat mein Pepsi ki vadakhilafi' (Betrayal of promises by Pepsi in India). Other such promises included 74 per cent investment in the food and agriculture-based commodities and 25 per cent investment in soft drinks. Then there is the proposition by PepsiCo to set up an agriculture research centre under the guidance of the Indian Agricultural Research Institute and the Punjab Agriculture University.

The entire book has been broken up into three sections. The opening section deals with the war over water. Besides articles on the issue of privatisation of water by transnational corporations, it includes an interesting speech by Oscar Olivera Foronda, the leader of the fight against privatisation of water in Cochabamba, Bolivia. The second section which deals with the culture of consumerism terms new consumerism as the "opium for slavery". The third section concentates on the coal giants Coca Cola and PepsiCo. Among other things, the local people's struggle against the Hindustan Coca Coal Limited plant in Plachimada, Kerala figure prominently. The book does not pretend to say anything new, but it does mark a novel attempt at collating all available information for those interested.