They demand moratorium on land acquisition; farmers' suicides, falling incomes and GMOs on list of concerns 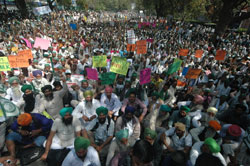 Thousands of farmers from 15 states have gathered at Jantar Mantar, demanding Prime Minister Manmohan Singh's intervention to resolve the farm crisis in the country. These farmers and agriculture workers, who have come all the way to the country’s political capital to show their collective commitment, have just one agenda – “reverse the grave Indian agrarian crisis”.

In response, the Centre formed a committee of four ministers to meet the farm leaders on Wednesday evening.

A range of issues from land acquisition to falling farmers’ income, new legal frameworks that threaten farm livelihoods and food sovereignty, and exploitation by new farm technology have brought these protesters together.

Addressing the masses, Bhartiya Kisan Union (BKU) chairperson Naresh Tikait said millions of food producers are being forced to abandon agriculture and leave the villages in search of insecure, unavailable jobs. Some are even pushed to suicide by dire circumstances. He said at this rate there will be only a small number of farmers left in the country in the near future. Our agriculture will be controlled by a handful of private corporations which exploit nature and people in order to maximise their profits. 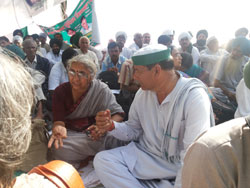 “Is this a sensible route in an age of a deep environmental crisis, when thousands are dying of hunger and need a secure livelihood? If the Indian government continues to promote unharnessed industrialization and elite consumerism, where will the water and electricity come from for such large industrial projects and what will be the impact on Nature and the poor?” asked Tikait. 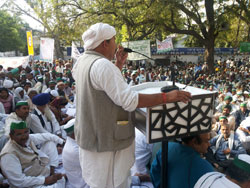 The leader lashed out at the Indian government’s current obsession with liberalisation and said the reforms were a dangerous trend. “Agriculture has been turned into a losing profession. Our lands, the primary resource for our livelihoods, are being grabbed for private non-agricultural purpose; there is no assured income for farmers; cost of cultivation is increasing; farm debts are rising; prices don’t cover cost of production; and markets are being opened up to favor big international agribusiness through FDI in retail and Free Trade Agreements. Such orchestrated efforts by the government are displacing the agrarian masses; millions of “Anna daatas” are being forced to either commit suicide or abandon agriculture and leave the villages in search of insecure, unavailable jobs,” he said.

The protesters demanded a complete moratorium on land acquisition across the country, especially acquisition of agricultural land for non-agrarian purposes by private parties. They advocate compulsory panchayat consent before acquisition.

The protesters included farmers from the Indian Coordination Committee of Farmers' Movements (ICCFM), a conglomeration of farmers groups such as BKU and the Karnataka Farmers Movement (KRRS). The gathering was also joined by the National Alliance of People’s Movements (NAPM) that defends the access of Indian people to land, water, forest and seeds – the most important resources of agrarian communities, and the source of food and livelihood for most Indians. 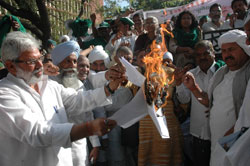 In the five-point demand created by the mahapanchayat, farmers’ income was pointed out as a major issue. “The average income of a farming household is meagre Rs 1,800 which is not enough to cover basic needs. Even the lowest government employee, a peon gets around Rs 20,000. How do you expect farming families to survive on this,” asked Rajpal Sharma of BKU.

The farmers demanded the establishment of a Farmers’ Income Guarantee Act and a Farmers’ Income Commission so that the government is directly accountable for improving the net incomes of farm households, tenant cultivators and agricultural workers. They also demanded that the law should have a combination of fair and remunerative prices (FRP) that include a profit above the cost price to meet living wages. This should be replace the flawed minimum support price (MSP), calculated by the Commission for Agricultural Costs and Prices (CACP), which currently doesn’t even cover the cost of production.

“What we need is a secure market for our produce. Even if we increase productivity through various available technologies, where will we sell our crops? If we are given a market we can produce more than any country using GM technology in the world. Instead UPA is promoting free trade agreements, such as the EU-India Free Trade Agreement so that they can dump their produce in our country, pushing our local farmers out of business,” said Yudhvir Singh of BKU.

The protesters also demanded that food should not be treated as a commodity and demanded ban on future trading of food commodities as it leads to volatility of food prices, leading to hunger and poverty. They also opposed foreign direct investment claiming that examples from most countries where such retail giants exist shows that companies have come to monopolize the food chain from procurement to distribution. This drives down farm gate prices and is against the interest of small farmers.

The protesters also asked for the promotion of ecologically friendly agriculture and opposed introduction of genetically modified or engineered crops, as the technology is being controlled by corporates. The leaders alleged that monopolisation of agri-technology leads to farmer exploitation as the companies demand high royalty, putting financial burden on them. It reduces choices available to farmers as well. They opposed the establishment of more biotechnology research centres in various parts of India. The protesters said GMOs are a costly distraction and wrong investment, and demanded that the government refrain from thrusting this undesirable technology on food and farming systems. Besides, they said they will not allow the enactment of the Biotechnology Regulatory Authority of India (BRAI) which ensures the introduction of technology in the country.

Among other demands was an immediate ban on projects that over exploit water and divert it  to large infrastructure projects, recreational projects or thermal power projects that are one of the main causes of river pollution. Instead, serious efforts need to be put in place to promote community-level control and management to restore ground water and to promote traditional water harvesting systems. Farming technologies that conserve water need to be promoted. Thus agro-ecology should get even more emphasis as it has the potential to not just use less water, but also to recharge ground water.

Swami Agnivesh expressed his great contentment that at a time when a very corrupt and anti-people government continues to carry out its anti-people agenda, it is a great sign that people’s movements are coming together to defend the rights of the common man and especially ‘Anna datas’. “It is a great shame for our country that we allow the suicides of our farmers and in fact deny that farmers’ suicides are going on. The parliament should have an emergency special session on the agrarian crisis,” he said.

During the week-long protest from March 18 to 22, the protesters burned copies of the Land Acquisition & Resettlement and Rehabilitation Act 2011 and held Kisan Khet Mazdoor Mahapanchayat on Tuesday.