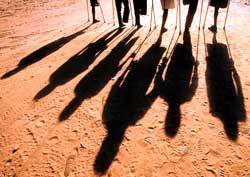 A n international agreement obliging warring countries to eliminate unexploded weaponry, which kill and maim long after the end of hostilities, came into force on November 12, 2006.

The Protocol V on Explosive Remnants of War was ratified by 24 countries. Its entry into force "is the beginning of a long series of actions to protect civilians against the horrendous effects of explosive remnants of war," un's S ecretary-General Kofi Anan said at the recent meeting of the Convention on Certain Conventional Weapons in Geneva. Under the pact, warring parties are mandated to mark contaminated areas after the end of conflict. They must clean up deadly debris such as unexploded shells, grenades and landmines, and warn civilians of the risks until the abandoned ordnance has been removed or destroyed.