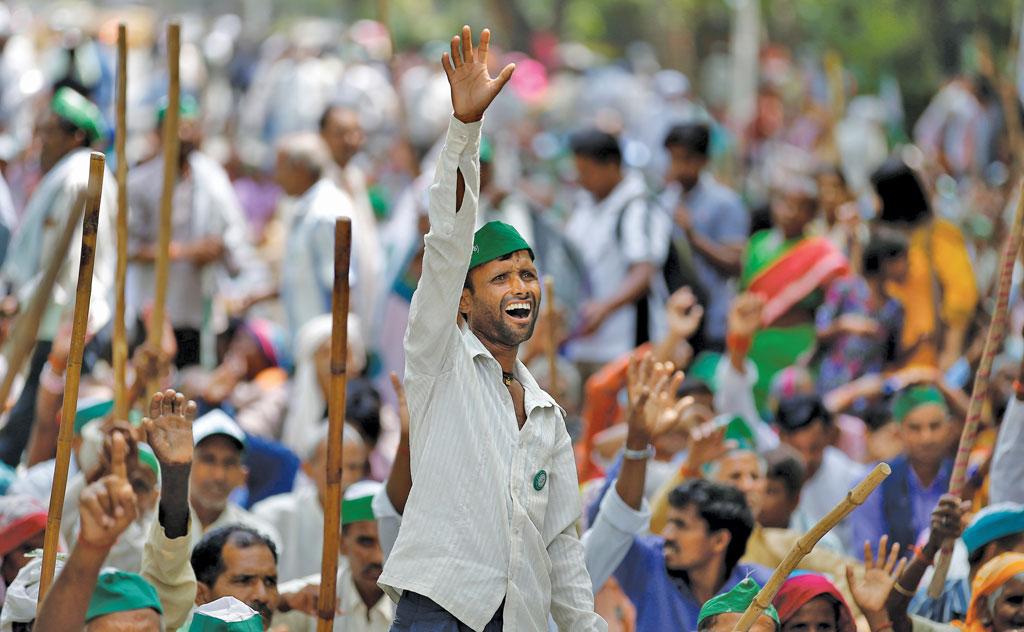 A protest against the killing of six farmers in Madhya Pradesh (Photo: Reuters)

ON JUNE 10, when Madhya Pradesh Chief Minister Shivraj Singh Chouhan launched an indefinite fast in Bhopal to restore peace in western Madhya Pradesh—the epicentre of farmers agitation brewing across the state since June to secure fair price for their produce and farm loan waiver—the price of onions at Ratlam mandi was a mere 25 paise per kg. Singh broke his fast after 28 hours and announced a host of schemes to pacify the protesters. Though he was silent on the issue of waiving farm loans, he asked the district administrations to procure all the onions at Rs 8 per kg and pulses at the minimum support price (MSP). While the government claims that the farmer unrest has halted following Singh’s announcement, farmer leaders say the movement is far from being over (see ‘Our protest is not over yet’,).

“We are trying to keep the movement on peaceful track which had turned violent after the killing of six protesting famers,” says farmer leader Shiv Kumar Sharma (Kakkaji), national convenor of Rashtriya Kisan Mahasangh, an umbrella organisation that has been spearheading the stir across the country. Ram Inania, a soybean farmer and farmer leader from Harda district, says, “Since the monsoon has arrived, we are now going back to our fields. But we will be back on the street in September.” Never before had the state witnessed a farmer protest of this scale and intensity. The only other protest in recent times was in 2010, when farmers with their tractors laid siege of the state capital. It lasted for only two days. But there is no let-up in the protests this time.

Why have matters taken an ugly turn in the state, which is emerging as the food bowl of the country (see ‘An absurd tale’, p24)? Analysts say the protest has its genesis in the long spell of drought, frequent hailstorms and unseasonal rains that the state has experienced in the past decade. In 2016, backed by a good monsoon, farmers harvested a bumper crop after seventh consecutive crop failure. But this came as the last straw. The bumper crop led to a price crash in the market. The price of cash crops like potato, onion, garlic, tomato and green peas hit a record low. Down To Earth compared the wholesale price of some of these produces in May this year with the rate for the same period last year, and the findings are startling. At Indore mandi, the price of green peas crashed by a whopping 80 per cent, potato and garlic by 60 per cent, tomato by 40 per cent and onion by 25 per cent. In Shajapur and Nimar, where farmers at the advice of the government’s extension services reaped a bumper orange and chilli crops, prices crashed by 38 per cent and 55 per cent.

At this rate, it was difficult for the farmers to recover even the production cost, explains Poonam Chand Patidar who owns 8 hectares in Ratlam’s Dhamnot village. In 2016-17 rabi season, Patidar grew onion, garlic and green peas on 80 per cent of his farmland and wheat on the remaining. In May, when he took the cash crops to Ratlam mandi for sale, he could not even recover the costs of packaging and transportation. “By afternoon that day, the price of green peas had dropped to Rs 2 per kg, even then no one was willing to buy. So I dumped the remaining 3,000-4,000 kg at the mandi and returned home,” he adds.

No crop or bumper crop, farmers are always at the receiving end, says Sharma. His words perfectly explain the plight of farmers of the Malwa region who heavily depend on another cash crop, soybean. In 2013, when its price was at its peak, the government doubled the import of soybean oil. This led to a price crash of the crop in the domestic market. Data with the Soybean Processors Association of India shows that the price of soybean has declined by 35-40 per cent since 2015. At Indore mandi, 100 kg of soybean costs Rs 2,700-2,900 this year; it was Rs 4,500 in 2015. “When the price of a crop rises, the government reduces import duty and floods the market with cheap commodities,” says Sharma. And this attitude of the government has added fuel to the protest.

Kedar Sirohi of Aam Kisan Union says productivity of soybean fields in the region had redu ced to half during consecutive droughts. Now, a price crash of crops and demonetisation have left farmers with little working capital to invest in the next crop. “This is enough to plunge farmers into another web of debt,” says Inania. “Loan waiver is the need of the hour,” says Devinder Sharma, an agriculture expert. Till the magazine went to press, four states, excluding Madhya Pradesh, had written off farmers’ loan (see ‘A nationwide wave’,).