Hot clime to effect the crop 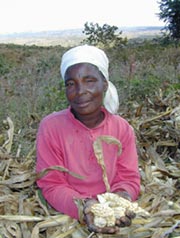 with temperatures increasing and rainfall patterns changing, a new study paints a grim food security scenario for small landholders engaged in rainfed maize farming in Africa and Latin America. The research, by Columbia-based Centro Internacional de Agricultura Tropical and Kenya-based International Livestock Research Institute (ilri), predicts an aggregate decline of 10 per cent in maize production of the regions by 2055. The decline means an annual reduction of 4.6 million tonnes of the crop by 2025, and 11.6 million tonnes by 2055 (loss of about us $2 billion per year at the existing maize prices).

The overall reduction hides large variations in crop yields of different areas. "It's the variability that's going to have the impact. Some places will be absolutely devastated," says Philip Thornton, an agricultural system analyst at ilri.

The researchers used a global circulation model to predict atmospheric conditions in 2055. The data generated was then used in a crop model. It simulated yields for different climates and soil types, for the present scenario and five decades later, assuming maize to be a monocrop grown using current varieties and agricultural practices. According to the research, in nearly three-quarters of the countries studied, yields will decrease. At the same time in areas like the Ethiopian highlands surrounding Addis Ababa, the yield may increase by as much as 100 per cent. In some areas in Venezuela, it will decline by almost zero per cent, while in others like eastern Brazil moderate changes are likely to occur.

The findings are important, as maize is the staple food for many poor families. The crop, about half of which is grown in developing countries, is also an important source of livestock feed during the dry season. It is remarkably tolerant of high temperatures compared to other staple crops. Therefore, in places where maize production is affected by global warming, it is unlikely that other crops will be able to maintain their production levels.