Ahead of polls, BPL politics in Chhattisgarh 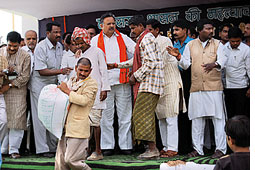 in december 2007, the Chhattisgarh government estimated that the state had 2.14 million people below poverty line (bpl) families in the state. A month later, while launching a new food assistance programme, the government pegged the figure at 3.4 million.

Opposition parties grabbed the chance to question the ruling bjp government on the credibility of the statistics of bpl families. The Congress Party alleged the government was trying to 'allure' voters, given that the state is going in for assembly polls in November.

Many experts say that the government has rushed into the food assistance programme and has not taken into account its negative impacts.

Under Mukhyamantri Khadyaan Yojna, the food-aid scheme, bpl families will get a monthly ration of 35 kg of rice for Rs 3 per kg. The scheme was launched amidst much fanfare, with a host of party leaders being present, including Venkaiah Naidu, Murli Manohar Joshi, Rajnath Singh, Narendra Modi, B C Khanduri, Gopinath Munde, Arjun Munda, Vasundhara Raje and Shivraj Singh Chauhan.

But with the new scheme in place, the government has suspended a few existing free-food initiatives for the scheduled caste and tribal families. The Pahari korwa and Birhore tribes, who were getting 10 kg rice free each month, now have to buy rice for Rs 3 per kg. About 1.5 million very poor families were getting 35 kg rice at Rs 2 per kg every month under the Antyodaya Anna Yojana programme, a central government initiative. People above 65 years were getting 10 kg of rice for free under the same scheme, now snapped.

Besides, a lot of irregularities regarding fake ration cards have also come to light. bpl cards were issued to reasonably well-off families. This has boomeranged in some cases. Ravibhushan Singh and Sunil Singh of the wealthy royal family in Korba district were surprised to find the family's name in the bpl list. "It seems to be a big joke," says Sunil Singh. He owns assets worth lakhs of rupees and has more than 20 hectares.

The state secretary for food and supplies, Alok Shukla, says there were "some mistakes in distribution of the cards. We have directed district collectors to look into the matter." The government has also ordered distribution of the list of ration card holders in gram sabha s to make distribution foolproof.

But critics remain sceptical. "The government has spent just Rs 6.65 crore and claimed Rs 800 crore for the scheme. The centre is giving the state government a yearly subsidy of more than Rs 1,100 crore to distribute rice at a fair price," said former chief minister Ajit Jogi. He added that the union government's scheme had been rechristened as the Mukhyamantri Khadyann Yojna to which the state contributes only 10 per cent.

But chief minister Raman Singh claims his scheme is the largest food scheme in the world. "The centre has reduced Chhattisgarh's rice quota to the below poverty line poor limit families to 616 tonnes from 61,000 tonnes. The state is facing heavy losses due to this. We get rice for just 700,000 families under the Antyodaya programme. The rest of the cost for the new scheme comes from the state's budget," he says.

With the controversy is fuming, many political parties have come up with their own promises. The state congress party president Charan Das Mahant said the poor would get rice for Rs 2 per kg if the Congress is voted to power.