In a monumental decision, the American government approves the world's first large-scale testing of an AIDS vaccine 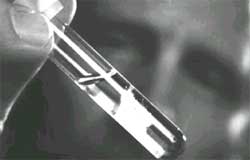 a california-based company, VaxGen, has received permission from the us Food and Drug Administration (fda) to conduct the world's first large-scale test of aidsvax -- an acquired immunodeficiency syndrome (aids) vaccine. Company officials said that the vaccine will be offered to healthy us volunteers very soon, and if the fda approves, then VaxGen also plans to test the vaccine in Thailand as well.

This "go-ahead" represents a major turning point in the agonisingly-difficult, decade-long efforts to develop and test an aids vaccine. Of the dozens of other experimental vaccines that researchers came up with over the last few years, none have been deemed worthy of such a large, expensive test.

Experts say that though the vaccine's actual potential to prevent aids is suspect, the permission to conduct the tests surely indicate a change in strategy. Because most scientists are still unsure as to what type of vaccines will actually work against the universally-dreaded disease, they point out that the candidates should be tested in large trials than in smaller tests.

"Even if it's 100 per cent negative results, learning that is worth the trial," said Peggy Johnston, vice-president for scientific affairs at the International aids Vaccine Initiative, a Washington-based nonprofit organisation. "The only failed trial is one that produces no answers."

Although new drugs have led to a decline in aids -related deaths, their long-term usefulness remains unknown, and they are unaffordable to many -- especially those in the developing nations, where 90 per cent of the new infections are occurring. For these reasons, health officials agree that an effective vaccine is the only possible way to curb the epidemic.

Counterbalancing the urgency to find such a vaccine, however, is a concern that premature testing of candidate vaccines might interfere with success. It is not easy to gather thousands of uninfected, at-risk people for inclusion in such trials, and scientists don't want to deplete that pool before the best vaccines come along.

VaxGen, based in South San Francisco, plans to test the vaccine on 5,000 gay men currently uninfected with the aids virus and in heterosexual couples with one infected partner. Two-thirds of the volunteers will get injections of the vaccine every six months for three years; and one-third will get shots of an inactive placebo.

Although all volunteers will get training in safe sex and other ways to avoid the disease, it is expected that some individuals will periodically put themselves at risk and become infected.

At the end of the three-year period, researchers and volunteers will learn for the first time who got the real shots and who got the placebos.

An fda spokesperson said the approval was based on evidence that was safe and was not an indication of the agency's confidence that it will work.

Donald Francis, VaxGen's president, said that he was confident that the vaccine would be at least somewhat effective. "The question," he said, "is how effective." Other scientists familiar with the product said that they believed that the answer was, "Not very."