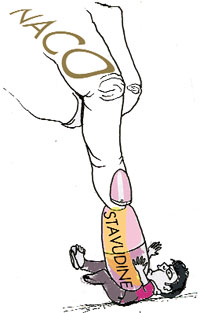 THE National AIDS Control Organisation in November procured in bulk anti-HIV drug stavudine, which is being phased out worldwide. NACO officials unofficially cite funds crunch for depending on the low-cost drug. Stavudine requires less monitoring of patients, they say. NACO provides free treatment to HIV/AIDS patients in the country.

In 2010, the WHO had revised its HIV/AIDS treatment protocol and recommended countries to phase out stavudine as the preferred first-line therapy due to its long-term, irreversible side-effects. The drug causes lipodystrophy, or irregular distribution of fat in the body, resulting in sunken cheeks and buffalo humps at the back and neck. It also damages peripheral nerves, causing numbness and burning pain in hands and feet. WHO had urged countries to move to less toxic alternatives such as zidovudine, tenofovir and abacavir. In line with its recommendations, Kenya, South Africa and a few other countries announced shifting from stavudine to tenofovir over the next five years. Developed countries, including EU nations and the US, have long been using stavudine as the last opted drug.

India’s HIV/AIDS treatment protocol remains unchanged. The technical resource group of the Union health ministry held a meeting soon after the release of WHO recommendations. It acknowledged the side-effects of stavudine but reached no consensus on phasing it out. Minutes of the meeting show that some members had argued that if all patients on stavudine are shifted to tenofovir, the expenses will nearly double.

As per NACO’s protocol, zidovudine should be given as the first preferred drug. If the patient developes complications like anaemia, stavudine is the option. Tenofovir is the last resort.

But in practice stavudine is always the first choice of doctors, says Loon Gangte of non-profit Delhi Network of Positive People. “In several instances, doctors change the treatment regime to zidovudine or tenofovir only after pressure from patient support groups,” says Shivangi Rai, legal officer with Lawyers Collective. The lawyers group is fighting a public-interest litigation in the Supreme Court to make stavudine the last option in NACO’s treatment protocol.

Doctors say they prefer stavudine and zidovudine because they are bound by the treatment protocol. A member of NACO’s technical resource group, on requesting not to be named, says: “We prefer stavudine as it is well tolerated and requires less monitoring. Besides, only five to seven per cent patients suffer from lipdystrophy and peripheral neuropathy.” Despite repeated queries, NACO refused to divulge the number of patients on stavudine.

Side-effects caused by stavudine mostly goes unreported because NACO does not have a programme to keep vigil on the health complications, says Leena Menghaney, campaign coordinator (India), Medecins Sans Frontieres, an international non-profit that works on access to essential medicines.

Public health activists say it is not just about giving the right drug, but giving the quality of life. With stavudine-induced disfigurement, patients face a double stigma. Anuradha of NAZ Foundation that works with HIV-positive children, adds: “Our children feel alienated in school due to their appearance. It lowers their self-esteem.” Of 16 HIV-positive children at NAZ who get treatment, 14 are on stavudine; eight have developed lipodystrophy.

When anti-HIV programme took off in India in 2004, stavudine was the only option. But now other safer and equally effective options are available, says Menghnany. But doctors often keep shuffling patients between stavudine and zidovudine, even though the patient develops side-effects to both. Patients with frequent regimen changes suffer from virological resistance and increased mortality. It is important to choose the safest treatment regime, she says, adding, tenofovir is the safest available option for adult patients. Studies show though tenofovir can cause renal complications, its risk of side-effects is six times less than that of stavudine.

But tenofovir was not even listed in the tender NACO procured in November.

Rai argues with both global and domestic aid, NACO has no dearth of funding. Bulk order brings down the cost. Studies show tenofovir is cost-effective; treatment cost to reduce further health complications is higher for other drugs (See table: How cost-effective). It has additional advantage, says Menghaney. One needs to take just a pill of tenofovir a day, which improves compliance with the treatment regime.