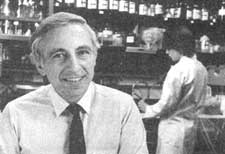 WAS ROBERT C Gallo guilty, along with his colleagues at the US National Institute of Health, of scientific misconduct for their conduct and reporting of the crucial experiments that led to the development of a diagnostic blood test for HIV, the virus that causes AIDS?

No, says the NIH finally, though it described Gallo's behaviour as "less than collegial" and "self-serving". The institute's Office of Scientific Integrity (OSI) took almost 30 months to produce its 119-page report, which has been passed on to US assistant secretary of health James Mason for final action.

Nevertheless, a panel of scientists from the National Academy of Sciences and the Institute of Medicine has been far more critical of Gallo, accusing him of "intellectual appropriation" and "essentially immoral" behaviour for not making key cell lines freely available to other researchers.

The most serious charge against Gallo and his associates is that they knowingly grew a viral isolate supplied to them by Luc Montagnier of the Pasteur Institute in France, and passed it off as their own. The basis for the charge is that the virus Gallo grew and used to develop his blood test -- a virus he called HTLV III -- is virtually identical genetically to Montagnier's strain, which he called LAV. Gallo now acknowledges the viruses are the same but attributes this to LAV contaminating his cultures, while consistently maintaining that as he had other isolates in his lab, he had no motive to steal Montagnier's isolate.

The OSI report recommends Gallo's associate, Mikulas Popovic, should be held guilty of misconduct for misstatements in a paper on their early work that was submitted to Science in 1984. The outside scientists, however, maintain that if Popovic is guilty, then Gallo also must be found guilty of misrepresentation.

Despite the marked divergence of views between the two scientist groups, disciplinary action seems to be the least that Gallo can expect for his role in a sordid episode that has clouded NIH's public credibility because it raises the question: Was NIH's investigation team competent?