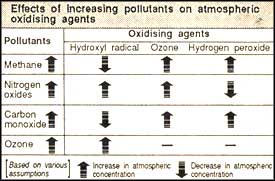 ANXIETY over ozone-layer depletion and global warming have inspired numerous studies into the changing nature of the earth's atmosphere. Indications are that increasing air pollution has not just dirtied the air, its graver effect has been its influence on the capacity of the various atmospheric constituents to oxidise or burn up polluting gases. The changes in the concentrations of certain oxidising agents -- ozone, hydrogen peroxide and the hydroxyl radical -- in the troposphere, the layer of the atmosphere closest to the earth, since the industrial revolution are affecting the very atmospheric balance maintained under the numerous, and simultaneous, reactions of these atmospheric constituents with each other and other trace gases.

The concentration of tropospheric ozone and hydrogen peroxide has increased and that of the hydroxyl radical (OH) has decreased, writes Anne Thompson of the National Aeronautics and Space Administration of the USA (Science Vol. 256, No. 5060). The decrease in OH is of particular significance. Known as the "tropospheric vacuum cleaner," OH reacts with pollutants like carbon monoxide and methane and also controls the accumulation of global warming-causing hydrogenated chlorofluorocarbons (HCFCs). The increase in ozone is of concern as it is a potent greenhouse gas. Higher levels of hydrogen peroxide will lead to acid rain formation.

Direct measurements of these constituents, particularly OH, which has a mean concentration of only about one million molecules per cubic centimetre (or one molecule in 50 trillion), is difficult and projections are being made to determine their past and future atmospheric concentrations.

Measurements indicate that high ozone levels in urban areas are a relatively recent and widespread phenomenon. Over the last century, ozone has increased in some parts of the northern hemisphere by about 0.1-0.3 per cent per year.

The modern record from which these trends are derived consists of ground-level monitoring at a few sites and vertical profiles collected at some 24 locations by balloon and rocket-borne instruments.

Indirectly calculating the tropospheric ozone concentration from more accurate satellite data, scientists have found that from 1979 to 1990, the highest ozone values were confined to the northern mid-latitudes (25O N to 50O N), due to widespread industrial pollution there.

The presence of hydrogen peroxide is difficult to monitor as it gets washed out by rain. But measurements from ice cores in Greenland show distinct trends over time. One sample that goes back to 1300 shows that dissolved hydrogen peroxide was 50 per cent less than in the ice formed during 1700 to 1989.

Though many chemical processes and feedback mechanisms in atmospheric chemistry are understood, predictions of ozone, hydrogen peroxide and OH concentrations on a global scale are fraught with uncertainty. The budgets of gases like carbon monoxide, nitrogen oxides and methane, which act as precursors of oxidising agents, are also not well understood.

As yet there is some uncertainty about the numerous reactions that go on in the atmosphere. And if humans continue to spew out industrial waste into the air, they might upset the fine chemical equilibrium of the atmosphere, with far-reaching and unpredictable effects.