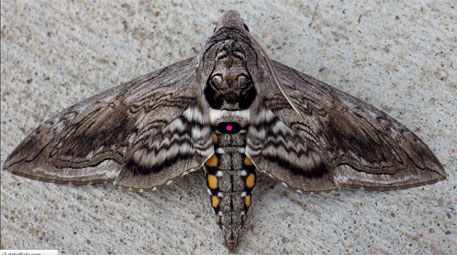 Pollinating  insects  are facing a serious threat from the growing number of air pollutants.

Manduca sexta, or the tobacco hornworm relies on it’s olfactory senses to locate flowers such as that of sacred datura, of the Datura genus, which is a very important source of food for it. However, a new study published in the June 27 issue of Science, finds air pollution, the smell of car exhaust in particular, may be inhibiting the moths’ food-hunting abilities.

The hornworm's sense of smell is normally comparable to that of a dog’s, are known to fly distances up to 130 km in one night in search of food. Not only that, the leaves of these plants are used as egg-laying sites by female moths. Once the larvae hatch, they feed on the leaves for nourishment. The threat is magnified by the fact that feeding from a flower can provide energy enough for only a few minutes’ worth of flight-time, so being misled during food hunts can result in waste of vital time and energy for the moth.

In the study, conducted by the University of Washington in collaboration with the University of Arizona, several moths, with electrodes attached to their antennae lobes, were placed in a computer controlled wind tunnel into which sacred datura fragrances were released, at varying concentrations. Background fragrances were then added, such as exhaust fumes from cars and trucks and fragrances of common garden plants and other flowers. It was found that the moths could find the datura flowers from a  few metres away, but only if the background odours were at a minimum. When overpowered by other odours, the moths failed to identify the flowers even at a close proximity.

In a natural environment, the problem is further complicated by the fact that the flowers often grow in dense creosote bushes, which emit the same fragrance as the datura, further confusing the moths.

There are several other insects that rely on flowers for food, such as butterflies and bees. Air pollution may be making it hard for these insects to locate their food, too. Plants which rely on pollinating insects like these moths to spread their pollen and germinate would also be impacted, thereby underlining the negative impacts of pollution, especially from vehicles, on agriculture.