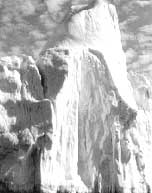 THE Alaska glacier is also facing the brunt of enviornment degradation. Till not very long ago, it was common for the ships to go right upto the glacier's 61 metre-high front wall. This is no longer possible today. The front has retreated by more than 12 kilometres in the last 16 years and now the ships are greeted by a vast expanse of melting icebergs and rocky shoal that stretches from where the shrinking glacier's wall used to be to where it is now. According to the scientists, this is a result of the warming of the cold regions and is a warning that the planet's climate is changing. Infact scientist employing laser instruments have confirmed that many of Alaska's hundereds of glaciers are retreating.

Scientist at the University of Alaska believe that the average surface temperature of the globe has been gradually rising over the last century. It has increased by as much as 5c in Alaska, Siberia and Northwestern Canada over the last 30 years, and the warming has been the most during the winters. There is some debate as to how much of this is related to the overall warming of the globe. Some scientists believe that warming of Alaska is a result of a change in the prevailing patterns of atmospheric circulation, beginning in the mid 1970s, which redirected the flow of the warm air from Pacific towards Alaska.

But researchers like Gunter Weller, an expert on climate change at the University of Alaska, USA, in Fairbanks insists that big areas of northern Russia which are in no way affected by the circulation change have also warmed as much as Alaska.

Alaska and other far northern continental regions should warm about twice as much as the rest of the globe over the next century, say the scientists. They cite two reasons for this. First, as the ice and snow melts, less heat is reflected off the land, amplifying the warming, and secondly, at these latitudes, the atmosphere is more stable in winter and spring, as a result more heat is confined to Alaska's lower layers.

The debate over the warming of Alaska may go on, but one thing is certain. Unless immediate steps are taken, the beautiful glaciers of Alaska may no longer remain be what it used to be.