A ship's ballast water is a serious threat to marine ecosystems 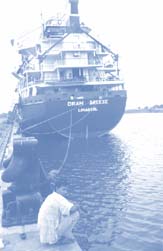 for millions of years, natural barriers such as oceans, mountains, rivers and deserts provided an ideal habitat for various flora and fauna. Now these natural barriers have been conquered. This had led to exotic species travelling vast distances to previously unknown habitats to invade new areas. This is regarded as one of the major threats to the native biodiversity of any place. The invasion of spices which are not endemic usually damaging and often irreversible.

The Global Environment Facility ( gef ) of the United Nations Development Programme ( undp ) recognises introduction of invasive marine species to different marine ecosystems as one of the four greatest threats to the world's oceans. The other threats include land-based sources of marine pollution, overexploitation of living marine resources, and destruction of marine habitat.

The most common medium of transfer of invasive marine species is ballast water. Ballast is any material that is used to weigh or balance an object. When a ship is not carrying cargo, it is filled with ballast water for maintaining its balance. When cargo is loaded, the ballast water is released back into the ocean. Around a 100 billion tonnes of ballast water is transferred each year across the globe. Though ballast water is absolutely essential to the safe and efficient operation of modern shipping, it also poses a serious ecological, economic and social threat to marine life.

The ships' ballast water consists of thousands of marine species, including bacteria and microbes, small invertebrates and cysts and larvae of various species. Waterfleas, jelly fish, crabs and clams also continue to be transported via the ballast water. The development of larger, faster ships completing their voyages in shorter time, combined with rapidly increasing world trade, means that the natural barriers to the dispersal of species across the oceans are being reduced. As a result, marine ecosystems have changed.

In usa , the European zebra mussel ( Dreissena polymorpha ), a freshwater molluscs, has infested over 40 per cent of internal waterways and a billion dollars have been spent on control measures since 1989. In southern Australia, the Asian kelp ( Undaria pinnatifida ), an algae, is invading new areas rapidly, displacing the native seabed communities. The list is endless. There are hundreds of examples of the impact of these invasive creatures on major ecosystems and human health across the globe. It is even feared that organisms causing diseases such as cholera are being transported through ballast water.