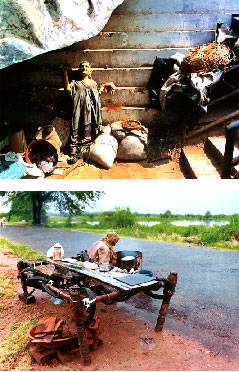 It should not be difficult to write about photographs that show the polluted Yamuna. The complications arise when the photographs under review were not taken for the print media but for an exhibition. And not even a traditional exhibition that presents the photographs as works of art. The exhibition is not a straightforward visual documentation of the state of the river; it's a photo documentation designed to influence the powers that be and, hopefully, affect a cleanup of the polluted Yamuna.

It is photography's multiple roles in contemporary society that lie at the heart of the 'problem' one faces in writing about an exhibition that is caught in transit between photography as social documentary and photography as a postmodern art in the digital age.

The birth of photography in the middle of the 19th century was supposed to have heralded the death of painting. A little over a century later the digital age seems to be sounding the death knell of "photography as we know it", as Ravi Agarwal puts it. "Has the photograph reinvented itself as we have?" he asks and wonders what a photograph means to him. "How does it relate to my state of being? How comfortable am I with its unpredictability?" It is these questions that underline the exhibition. There seems to be a clash in the photographer and social activist in him (he is the founder director of Toxics Link, an ngo dealing with disposal of toxic waste).

Painting did not die with the invention of photography. It simply moved away from its representational role and became a formalist art form that was not trying to mimic or reproduce nature but was self-referential art for art's sake: what mattered was composition, colour and texture. It was art that sat more comfortably in the secular and politically sanitised spaces of the modern world's museums and galleries than in the more political, ritualistic and religious spaces of its birth in caves, churches and the street. Modernism negated art's religious and political significance and neutralised its critical power in the name of form and the value it attached to an artist's expressive insight.

Photography seems to be following the same path. Its recent move into the fast expanding art market is an increasing rejection of its critical representational role, its social spaces and its political power.

Photography's documentary role seems to have been reassigned to documenting, preserving and presenting performances as art. The body is apparently the new art medium of our times. In performances, as a performer, the body moves from being an objectified 'composed' within-a-frame body to becoming the "self-posed" body creating and controlling its own space. It is now used to explore the subjectivity of an experience as against the objectification of an objective point of view.

Ravi, in fact, describes his 'The Shroud' performance sequence in personal terms as 'an immersion and an emergence'. And the exhibition, shot over a period of two years, is about a personal 'nostalgia for the clean waters and long gone wagtails, about recovering a sense of the self, and reducing an increasing alienation'. 'Performance art' was, interestingly enough, a protest against the commodification of art. It began as 'protest art' in the late 1960s and moved from showing the body to using the body politically for a larger social and political comment. It was a way of asking questions instead of trying to show facts.

Photography, as a form of social criticism, is not just a record of urban experiences but a way to change them. It is a rejection of the role of the artist as a hero and sees the creation of art as intervention, as a social healing that creates environmental awareness and is aware of what it means in the larger society. One wonders about the separation of the photographer/activist /artist role of photographers today. Why do they insist on this separation? Photographers as photojournalists or as social documenters have always been social activists. As independent documentary photographers, they have always provided the critical depth that their media colleagues' could not.

The Museum of Modern Art's projection of photography as a formalist, self referential artform that raised(or should that be reduced) documentary photography to a sanitised 'documentary style' fine art form is a reminder of the power of the art world's institutions. We need to talk about and challenge the power of these institutions in sanitising and controlling cultural practices. The final product of photography is not, and cannot be, just the art market oriented print or a photo documented performance.