India’s demand for mobile phones is almost insatiable. Telecom companies are falling over themselves to cash in on it, even if it means resorting to unethical deeds

Whether it’s the high-profile 2G scandal or the Antrix-Devas deal, spectrum has been at the centre of both the controversies.  In the 2G case, former telecom minister A Raja gifted away 2G spectrum licences to nine telecom companies at very low rates. The Comptroller and Auditor General of India (CAG) put down the loss to government in the deals at Rs 1.76 lakh crore. In the Antrix-Devas deal, Devas Multimedia Pvt. Ltd., constituted by former ISRO employees, entered into a contract with Antrix Corporation, ISRO’s commercial arm. ISRO sold 70 MHz in the 2.5 GHz spectrum at throwaway prices to Devas. CAG estimates the loss of revenue to the government from Antrix’s deal with Devas at Rs 2 lakh crore.

A look at what spectrum is all about:

When the mobile phone was first launched about two decades ago, not many envisioned that such a bulky and expensive device would go on to become one of the world’s most indispensable modes of communication. But despite its omnipresence many people are still ignorant how it functions. 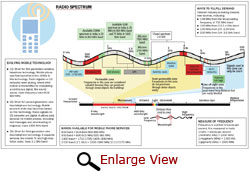 Energy travels in the form of waves known as electromagnetic waves. These waves differ from each other in terms of frequencies. This whole range of frequencies is called the spectrum. In telecommunication like TV, radio and GPRS, radio waves of different wavelengths are used. They are divided into bands based on frequencies (see ‘Radio spectrum’). Mobile

Most of the radio spectrum is reserved in countries for defence. The rest is available for public use. But following an increase in the number of phone users and new services, countries started auctioning the frequencies to telecom companies.

This sale has become a major revenue earner for governments around the world. But in India, the case is different (see ‘How India lost to scams’). It is currently auctioning the spectrum in the range of 1959-1979 MHz. This, however, is not sufficient to meet the growing appetite for mobile phones and its services.

S band was allocated by the World Radiocommunication Conference, organised by International Telecommunication Union (ITU), in 2000 for terrestrial mobile communications 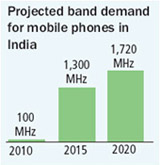