All bark, no bite

More noise than action: this is what the painfully resurrected wildlife board of India indulged in after a yawning gap of nine years 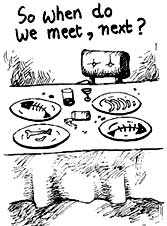 too little and too late. Pushed by scathing reports from international ngos like the uk-based Environment Investigation Agency (eia) on the pathetic scenario in India's wildlife sector, the Indian Board of Wildlife (ibw) finally met on March 13 in New Delhi, after remaining invisible for nine long years. Prime Minister (pm) H D Deve Gowda chaired the meeting at Vigyan Bhawan.

While the assembled gentry characteristically nodded their heads over the "serious crisis in the country's wildlife", the pm agreed that "something had to be done". Firebrand wildlife activists traded charges with defensive bureaucrats over the number of elephants killed in Assam last year. But as far as a cogent policy on wildlife conservation was concerned, the meeting had none to boast of.

"You cannot expect anything sensational from one meeting," protested Kishore Rao, deputy inspector-general of forests, ministry of environment and forests (mef). "The very fact that the board has finally met should in itself be a positive step," he said. Answering queries about the board's rather late awakening, Rao explained, "The ibw was supposed to meet for quite some time. But since 1988, the government has been witnessing a number of upheavals. Prime ministers changed, environment ministers were reshuffled. Moreover, the member list of the board had to be updated. This led to the delay." According to Rao, mef plans to make the ibw a statutory body to safeguard it from governmental changes.

Says Brijendra Singh, representative of the Cat Specialist Group of the World Conservation Union and member of the ibw, "It's good that the board finally managed to meet, albeit due to international as well as domestic pressures from various ngos." On October 22, 1996, the eia had released a report titled The Political Wilderness - India's Tiger Crisis , chiding the Government of India for its lack of political will in conserving wildlife. According to the report, one tiger is killed every day in the country. "If such reports had not been released, I don't think the board would have ever met," said a senior mef official.

"Environment and forests is part of the concurrent list of the Constitution," said Rao. "Hence, the Centre can only provide a legislative framework, funds, and certain policies. But the implementation of such policies, the use of the legislative framework and funds, is solely the responsibility of the concerned states. The pm admitted in the meeting that there was a need to sensitise the states in conserving their wildlife," he added. Countering the statement, Singh said, "Frankly speaking, I cannot see anything happening of the government's own volition."

The meeting discussed issues like proper fund utilisation for conservation, strengthening and modernising the wildlife departments of various states, and implementing various expert committee recommendations and the like. According to mef officials, plans are afoot to establish a sub-committee to monitor critical tiger reserves.

On the issue of organising funds to implement the recommendations of expert committees, the board suggested that Rs 2,400 crore be earmarked for forests and wildlife in the Ninth Five Year Plan. But sources within the ministry expressed doubt whether the Planning Commission would at all agree to the allotment of such a large sum.