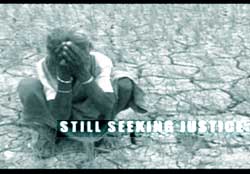 Prem Kumar Aman is an angry director. Back in 1956, Telengana, recently released from years of feudal subservience under the Nizam of Hyderabad, was an independent state. Then, as Aman sees it, disaster struck, and inland Telengana was merged with coastal Andhra to form the new state of Andhra Pradesh. Today, Telengana is starving and thirsty and the blame, according to this highly venomous documentary, lies at coastal Andhra's door.

The escalating poverty of farming communities across Andhra Pradesh is well-known. Telangana is a particularly arid district: the monsoon rains that scatter coastal Andhra fall lightly on its inland neighbour. Irrigation systems are inadequate, borewells yield little water, and fluorosis cripples many who drink from the diminishing supply of groundwater. Recent drought has further ravaged this parched land. Starving families have been forced to migrate in search of labour to urban centres -- or wherever they can find it. 14 lakh people migrate every year from this district looking for work. In recent years, desperate farmers, driven by crop failure and mounting debts, have taken their own lives, drinking the pesticides which are no longer any good to them.

So much is known. Aman's film takes a controversial stance towards Telengana's problems, however. Claiming that since Telengana merged with Andhra in 1956 its problems have worsened, Aman interviews people and uses statistics to list injustice after injustice. The waters of the Godavari and Krishna rivers, which flow through Telengana, have been harnessed and stolen by Andhra, the director claims. Irrigation systems have failed to materialise, and the ancient system of tanks and wells, on which Telegu people have relied for ages, have dried up. Aman's protagonists blame this on corrupt politicians who siphon off water for coastal Andhra, neglecting their inland counterpart.

The answer, Aman declares, is to draw a boundary in the arid earth and declare a new state. Since the late 1960s, a pro-Telangana movement has been growing, which demonises Andhra's influence in the area's local politics. The film's sympathies are with the movement.

The problems afflicting agricultural communities across Telengana and Andhra Pradesh as a whole need urgent recognition. However, this film relies too heavily on unsourced statistics, and in his docu-rant, the director damages the plausibility of his arguments.