All work and no foreplay 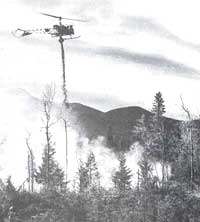 MYANMAR'S minister of forestry Chit Swe has launched, with much fanfare, an ambitious project to artificially inseminate a 6,000-strong herd of elephants, which lift heavy logs in the teak forests of Myanmar. Swe has enlisted the help of Michael J Schmidt, chief research veterinarian of the Washington Park Zoo, in Oregon in the US, to establish a fast-breeder programme to help the elephant population multiply.

The government believes that the number of pachyderms has been dwindling mainly because the animals are working too hard. Bulldozers have been made off-limits in the erosion-prone hillsides of Myanmar. Thus, elephants are used to transport the lumber, which is the biggest foreign-exchange earner for the country. After a day of lifting heavy logs, the animals are just too drained to copulate. As a result, Myanmar is now has only about 1/3rd of the 35,000 Asiatic elephants that it once possessed.

Now, Schmidt promises to change all that, by impregnating female elephants through artificial insemination. "Bringing a vial of semen to a cow is certainly a lot easier than bringing a 12,000-pound bull elephant," says Schmidt. He is convinced that this will not only save the Asian elephants, but can also be used to enhance the genetic diversity, by injecting the semen of African bulls.

The programme is, however, dogged by problems. Timing insemination to peak female fertility is still being worked upon as female elephants come to heat about every 16 weeks but show no signs of it. Also, the Myanmar elephants are yet to get used to "electroejaculation" -- a combination of a sedative and electricity -- that has been evolved by Schmidt to ensure reliable collection of semen.

Schmidt is, nevertheless, optimistic and has persuaded the government to cut back on the work schedule and provide extra food to the elephants, in the hope of creating a more "romantic" atmosphere in the work camps.