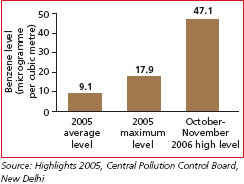 despite petrol's benzene content being lowered from 3 per cent to 1 per cent in 2000-2001, there has been no significant effect on the current ambient levels of this carcinogenic chemical.

cpcb's Highlights 2005 shows that the annual maximum concentration of benzene in ambient air in Delhi's Sirifort Area was as high as 17.9 microgramme per cubic metre (g/m3); the annual mean concentration of benzene was observed at 9.1 g/m3. In India, there is no prescribed safety limits for benzene till now.In 2005, cpcb intended to set the limit at 10g/m3, which was to be progressively reduced to 5 g/m3 by 2010. But the proposal is yet to be implemented.

The area surrounding Siri Fort is a flat plateau and thick with homes and commercial establishments. The report mentions "There is no major immediate source of air pollution in the vicinity of Siri Fort monitoring station. However, there may be some impact of vehicles plying on a busy road at a distance of approximately 100 metres from the station".

Even in October-November, 2006, the daily benzene levels were as high as 47 g/m3(see graph Rising shadow). who estimates that lifetime exposure to 1 g/m3 of benzene will increase the risk of leukemia in four of every million people.

The Current Science paper indicates that though concentrations of benzene in the ambient air are low in urban settlements, it does not hold true for roadside levels, market places and traffic intersections.

The paper draws upon evidence from Mumbai and recommends "Concentration of benzene at the traffic corridors should be studied along with that in the ambient air on a continuous basis to safeguard the health of commuters, shopkeepers and shoppers." The neeri researchers, too, found that the concentration of benzene is maximum at petrol pumps, followed by parking areas and traffic junctions. Arterial roads and highways were also benzene hotspots, the study noted.