Parliament, on March 20, passed the bill proposing amendments to the 1957 Act governing the mining sector. The process of passing this bill reflects the problems Indian democracy faces wherein it is now impossible to get a bipartisan agreement on even an issue as important as mining.

The Mines and Minerals (Development & Regulation) Bill of 2015—MMDR Bill, 2015, in short—was passed by the Lok Sabha on March 3. For a sector like mining that affects the lives and livelihoods of millions of people from the most marginalised sections of society, the bill was not discussed with most stakeholders before being presented in the Lok Sabha. When it reached the Rajya Sabha, the opposition forced the government to send it to a select committee for review. However, the committee was given only a week to do its job and most stakeholders were again not consulted. The select committee deliberations, therefore, became party political and no consensus was achieved on real issues concerning the mining sector. In the end, more or less the bill that the government had originally proposed was passed by Parliament. 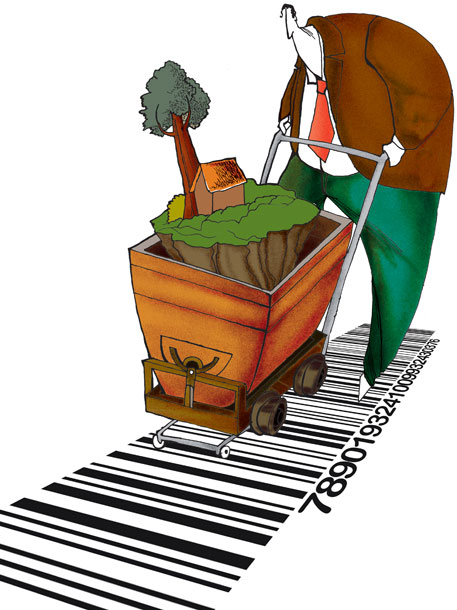 It is important to understand the bill’s implications for the people, environment and the future of the mining sector itself.

For more than a decade the country has debated the need to amend the MMDR Act of 1957. This culminated in the MMDR Bill, 2011, that was introduced in Parliament, proposing an entirely new governance model for the mining sector. However, due to disagreements within the United Progressive Alliance government and pressure from industry it was allowed to lapse in 2014. The MMDR Bill of 2015 is a distorted version of the 2011 bill. In it, a coherent whole has been truncated to suit the short-term needs of industry and all progressive ideas to improve the environmental and social performance of the sector have been thrown out of the window.

The mining sector is plagued by poor and multiple regulations, discretionary decision-making powers, weak institutions, inadequate monitoring and feeble enforcement. There is also lack of capacity within the government for assessment of mineral resources and for development and monitoring of mining plans and environment and social management plans. Simply put, the governance structure of the sector is outdated and needs serious reforms.

The major governance reforms in the 2015 bill include introduction of an auction mechanism for allocating all mining concessions and provisions for timely decisions, increase in penalty for violations and creating special courts for speedy trials. These reforms are inadequate and some could even create more problems. For instance, simply increasing penalty for violations within the existing institutional framework makes rent-seeking behaviour more lucrative and will not curb illegal mining. Similarly, in the absence of strong and scientifically competent institutions to establish mineral reserves and valuation, auctioning can be manipulated for private interests.

The biggest problem with the bill is that it jeopardises all the gains made in the past 10-15 years to improve environmental practices in the sector.

The environmental performance of a mine is closely linked to how it is opened and ultimately rehabilitated and closed. In fact, it is said that a mine should not be opened if it cannot be closed. Under the new bill all mining leases shall be granted for 50 years, with no requirement for renewals. The lease period for existing mines has also been extended to 50 years. After expiry, leases can be re-auctioned.

Long lease period will mean thousands of mines will be kept open simultaneously. This does not make sense from an environmental perspective because every open mine is a source of pollution. From an economic perspective 50 years’ compulsory lease amounts to sitting and speculating on resources.

It makes more sense to open a mine, remove all minerals quickly, progressively rehabilitate and close it, and return the land to the owners. But the long lease period with subsequent re-auctioning provision means leaseholders will keep the mines open and shift the burden of rehabilitation to future generations. The long lease will also make it difficult to establish appropriate financial guarantees to ensure mine closure happens. This will bring back the practice of “dig and run”, adding to the country’s poor legacy of abandoned mines.

The MMDR Bill, 2015, along with the changes proposed in the environment and forest clearances, Land Acquisition Act and Forest Rights Act, will further alienate communities affected by mining and increase conflicts in mineral-rich areas.

India’s most mineral-rich districts are also its poorest as local communities have benefitted the least from the wealth of mining. Recognising this, the MMDR Bill, 2011, had specified that for major minerals, the leaseholder shall pay annually to the local community an amount equivalent to the royalty. For coal and lignite, it was to be an amount equal to 26 per cent of the profit after tax. This money was to be deposited in a fund for specified benefits of the community.

The 2015 bill has considerably diluted this provision. First of all, leaseholders are now required to pay not more than one-third of the royalty from the minerals which converts an entitlement into charity. Secondly, it is now up to the states to decide how these funds will be used for the benefit of the community, leaving scope for misuse.

The MMDR Bill, 2015, will also lead to more displacement. The Centre now has discretionary power to allow mine leases beyond the stipulated 10 square kilometre area, with no specification of the extent the area can be extended to.

The government’s other move, the Land Acquisition (Amendment) Bill, recently passed in the Lok Sabha, just adds to this, as it removes the requirement of consent of land owners for land acquisition for private and public-private infrastructure projects that include mining. The provision of public consultation and hearing before environmental clearance is also being systematically diluted.

All these changes mean neither are the benefits from mining going to be shared adequately with the affected people, nor will the people be asked before their lands are acquired for mining activities. Mining will happen as a fait accompli.

Yet it will not help the mining sector in the long run.

Not the best for mining itself

The development of the sector requires fair play, clarity of processes and security of investments. Though the bill intends to achieve these objectives, its prescriptions might end up jeopardising them.

The bill creates a blanket provision for granting all types of mineral concessions through auctioning, including mining leases and prospecting-cum-mining leases. Auctioning is the best way to allocate mineral concessions where the deposits can be accurately established and proper valuation can be done. This will capture the windfall profits as well as bring in transparency. But in cases where mineral deposits are not properly established, auctioning can result in undervaluation of minerals and subsequent lower revenues for the government, or overvaluation, rendering the concession holder incapable of meeting commitments. Auctioning is, therefore, best suited for a mining lease but not for prospecting-cum-mining leases. For such leases, a transparent “first-in-time” principle is used across the world.

The proponents of this bill have also decided not to learn from mistakes. For short-term growth, they are taking the sector back to the exploitative practices of the past. This will hurt the long-term sustainability of the sector itself.