Hillary Rodham Clinton, head of the US President's task force on health, has a tough task ahead in providing Americans with low-cost, quality health care. 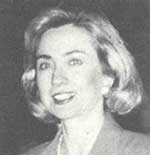 AS HEAD of the President's task force on national health-care reform in USA, Hillary Rodham Clinton, wife of President Bill Clinton, has her job cut out for her.

A majority of Americans want quality health care at a lower cost, according to a New York Times/CBS News poll, and they are ready to accept -- despite the bogey of socialised medicine -- greater government involvement in health care, if it results in a check on rising costs and guaranteed coverage for all.

The nationwide telephone poll of 1,386 adults was conducted in the midst of a debate on US health care, whose spiralling cost made it a major campaign issue.
USA spends double the amount most industrialised countries spend on health care each year. In 1990, USA spent $666 billion, or 12.1 per cent of the GDP, on providing its people with medical care. This figure is expected to increase to $1,740 billion per annum, or 15.1 per cent of the GDP, by the end of the decade. In addition, medical insurance premiums paid by firms on behalf of employees have been rising steeply -- almost 20 per cent a year.

Despite all this expenditure, however, USA ranks 20th in the world for the number of child vaccinations conducted. More than 35 million people nationwide are not covered by current medical schemes. They have no employer-paid health insurance, but are not poor enough to qualify for federally-sponsored health care either.

The President has expressed his preference for the managed competition approach -- under which doctors and patients would be encouraged to join health maintenance organisations (HMO), or other pre-paid schemes that provide a set of services in return for fixed premiums -- to rectify the situation. But to ensure the managed competition approach succeeds, tax exemptions on employer-paid premiums must either be scrapped or limited.

The managed competition approach was developed by an influential group of academics, industrialists and insurance executives called the Jackson Hole Group. But this approach requires increased and detailed managing of clinical work, which results in high administrative costs. Almost 50 per cent of privately insured Americans are covered under managed competition schemes and after initial savings, their costs have risen almost as fast as those in fee-for-service plans.

With the growing realisation that the managed competition approach is too complex, inequitable and expensive, Hillary set up groups to work on formulating simpler fall-back plans. One of the schemes that was evolved was a managed competition plan on a restricted budget, which would mean all individuals and employers share the cost of health insurance through regional health insurance purchasing cooperatives under federal budgetary control. These cooperatives would link up with HMOs to provide medical care. The package would be uniform and consumers could choose their plan annually on the basis of both cost and quality. The federal government would set budgets within which these cooperatives would operate.

However, the compromise scheme proposes redirecting health care funds from specific areas to those groups in USA who were previously not covered by medical insurance, such as the mentally ill and the aged. This will definitely evoke protests from the hitherto pampered groups, from whom the funds are being diverted.

Sensing the difficulties in getting the American people to accept her plan, Hillary has started a whirlwind campaign in an effort at limiting the political fallout. On March 12, she held a health-care seminar in Florida, and three days later, one in Iowa. The ostensible purpose of these seminars was to allow people to voice their complaints about the present medical system and suggest improvements. But they also created a perception of open governance, which helped her counter the recent allegations by lobbyists who claimed it was illegal for the task force to meet in private.


The state of Florida has, meanwhile, approved a plan to overhaul its health care system, and its proposals -- some of which are reportedly quite drastic -- are likely to foreshadow the national reforms being considered by Washington. Florida's plans aim at extending medical insurance to the millions of people left out by the current system and Governor Lawton Chiles says the Florida blueprint should serve as a model for the nation.

The state's programme follows the managed competition principle, but will be applied on a wider scale than the schemes adopted in less populous states. The plan also envisages the creation of 11 regional cooperatives that will act as purchasing pools and negotiate directly with doctors and hospitals for medical services.

However, Hillary's efforts notwithstanding, health care costs are still predicted to rise and result in deteriorating service from demoralised doctors in USA.