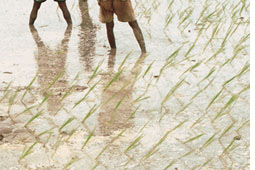 despite the two recent floods which forced farmers to plant seedlings late, Bangladesh has achieved season's target of cultivation of paddy on 5.3 million hectares, say officials. In August and September, the country faced two massive floods which affected two-thirds of its land, especially in the central districts around greater Dhaka. Many farmers lost second paddy crops planted after the first flood.

Recently, from many parts of the country there were reports of isolated pest attacks on late monsoon amon crops. The reports have caused widespread concern among farmers over an impending food crisis with the price of essentials steadily going up. But officials at Bangladesh's Directorate of Agricultural Extension (dae) say pest attacks on the amon crops are not going to be as devastating as expected. Nure Elahi, director general of the Bangladesh Rice Research Institute says most amon paddy crops are matured and are strong enough to survive pest attacks.

Moreover, insects that usually breed fast in the monsoon will disappear in the winter and the current harvest in November will not be affected, says Altaf Hossain, director, Plant Protection wing of dae . Another dae official says the body also plans to give maximum support to the farmers for the next boro paddy crop during the dry season which gives the highest yield of the three paddy crops.