An amendment to deny 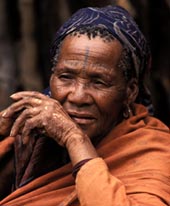 In a historic move, Bushmen sued the Botswana government for forcing them off their ancestral land, the Central Kalahari Game Reserve (ckgr). Lending a new twist to things, a Botswana government spokesman has gone so far as to suggest amending the constitution should it lost the case. The Bushmen are asking the court to declare that the government's decision to evict them and stop providing services such as a water supply is unlawful and unconstitutional. "They can stay if they want to, but we cannot afford to supply them with services," said Sydney Tshepiso Pilane, adviser to the President Festus Mogae and the man leading the government's court battle with the Bushmen. "They do not belong where animals do, they belong in settlements, villages, towns and cities like you and me," he said.

ckgr boasts of wildlife and diamond deposits (possibly the true motive behind the removals). Whatever the ruling, its implications will extend beyond Botswana. If the Bushmen are not recognised as Southern Africa's indigenous inhabitants and accorded the same rights under international law as Australian aborigines and Native Americans, it could lead to similar denials for other African first peoples.