An ocean of wealth

The first census of marine species 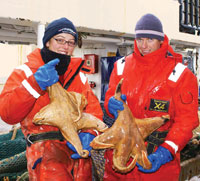 FISHERS’ folklores are full of them but the creatures of the deep sea are still a mystery.

An inventory of marine species, to be released in London on October 4, would answer the age-old question— what lives in the oceans? The Census of Marine Life, a network of researchers from more than 80 countries, has catalogued existing marine species after a 10-year study.

Over 230,000 marine species are known to scientists, but for every known marine species four species are yet to be discovered, said an overview of the census published in the August 2 issue of PLoS ONE. Scientists are worried many species may vanish before they are discovered. The threats they face include pollution, rising sea temperature and ocean acidification.

A team of scientists led by Derek P Tittensor, researcher with Dalhousie University in Canada, used the census data to study the effects of environmental conditions on the global distribution of marine biodiversity. The findings published in Nature on July 28 said there is a strong link between temperature and biodiversity distribution in the 11,563 species that were studied.

The researchers found marine life could be divided into two categories: coastal species like corals and fish that peak around Southeast Asia, and opensea creatures like tuna and whales that favour mid-latitude oceans. The researchers found warmer waters show more diversity of coastal species, except for seals which show diversity in cooler waters. Open-sea species too flourish in warm waters, but their diversity declines when the seawater warms over 25-30oC. This explains why these species did not peak near the Equator where the waters are the warmest.

“There was a consistent relationship between temperature and marine diversity for every group we studied,” said Tittensor. Future changes in ocean temperature may cause marine diversity to rearrange, he added. “Our research provides evidence that limiting ocean warming and other human impacts would be important in securing marine diversity,” said Camilo Moro, the coauthor of the study. Preserving a more diverse system is vital as it provides more goods and services like higher fish yield, higher tourism value and better coastal protection, Tittensor added.

S W A Naqvi, scientist at National Institute of Oceanography in Goa, agreed with the researchers. “Temperature is one of the most important environmental determinant influencing species distribution,” he said. But the effect of global warming on species distribution is debated, Naqvi said.

Researchers from the Canadian university gave an example. They analysed 100 years of data on phytoplanktons and said the marine plants that constitute the foundation of the oceanic food chain are declining at the rate of one per cent a year. Since 1950, about 40 per cent of the phytoplanktons have declined, shrinking the food base, the researchers reported in Nature on July 29. This decline is because of rising oceanic temperature, said lead researcher Daniel Boyce. Rising temperatures make the ocean more stratified, restricting the movement between different layers and decreasing nutrient delivery to the surface where phytoplanktons grow, he added. The exceptions are the Indian Ocean and coastal zones where fertilizer run-off from farms is increasing nutrient supply to phytoplanktons leading to their bloom, they said.

Naqvi said there is not enough data either to make a case for decline of phytoplankton in the oceans or show their increase in the Indian Ocean.